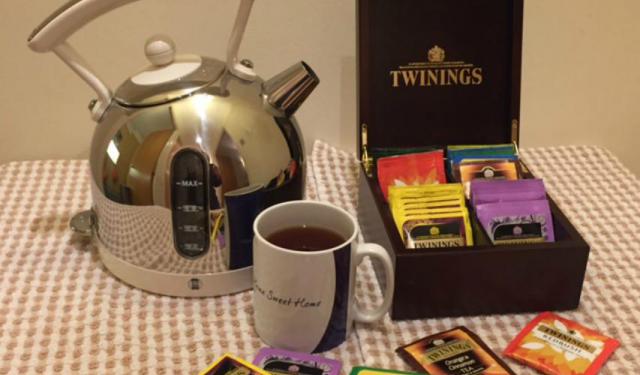 If, like me, you enjoy history and a good cup of tea, there’s a place in London you shouldn’t miss: Twinings tea shop at 216 Strand has it all – wrapped up in one tidy little rectangle of a retail space.

The Twinings (rhymes with signings) shop at 216 Strand is easy to miss. It’s a pint-sized place squeezed between two ample edifices, and its facade is basically no wider than its double-door entry. Tea has been continuously sold out of this skinny store for 300 years, by ten generations of the Twining family.

But the tale of Twinings tea goes back even more than 300 years, and it actually starts with coffee. By the mid 1600s, coffee shops were all the rage in London. They were a bit like gentlemen’s clubs: men went there to discuss the news and politics while drinking their coffee – no women were allowed. By 1700 there were at least 500 of these coffee houses in London. When a new drink, called tea, arrived from China, the coffee shops began to sell it as well – both by the cup and in dry form. ...... (follow the instructions below for accessing the rest of this article).
This article is featured in the app "GPSmyCity: Walks in 1K+ Cities" on iTunes App Store and Google Play. You can download the app to your mobile device to read the article offline and create a self-guided walking tour to visit the attractions featured in this article. The app turns your mobile device into a personal tour guide and it works offline, so no data plan is needed when traveling abroad.