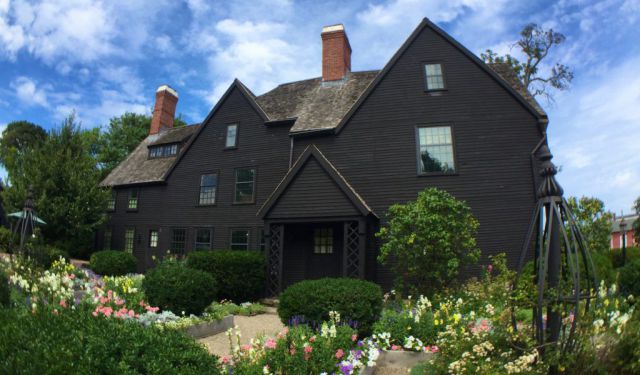 The #TwoChicksAndARoadTrip adventure continues onward with me behind the wheel of our white Mustang convertible and Danielle (CruiseMiss) convinced I’m going the wrong way most of the time. Ok, that’s not true — at least not for all of the time we were on the road. On this leg of our road trip we were headed to historic Salem, Massachusetts.

Situated on the North Shore, Salem is a quaint city of just over 40,000 residents and a must visit destination for anyone visiting Massachusetts. Salem has a rich and interesting history that includes, of course, the notorious Salem Witch Trials. Wherever you walk around Salem, you’ll see evidence of its history in statues, signs, and buildings.

TSG Tip: Why were the witch trials not necessarily that unusual to Salem residents? When the colonists arrived from England, they already had their fear of witches intact with accusations, witch hunts, and trials a somewhat regular occurrence back home.

Did you know that second to last of the eight seasons of the 60’s and 70’s popular television program, Bewitched, was filmed in Salem? TV Land unveiled the statue in 2005 in Salem to mark the 40th anniversary of the show. ...... (follow the instructions below for accessing the rest of this article).
This article is featured in the app "GPSmyCity: Walks in 1K+ Cities" on iTunes App Store and Google Play. You can download the app to your mobile device to read the article offline and create a self-guided walking tour to visit the attractions featured in this article. The app turns your mobile device into a personal tour guide and it works offline, so no data plan is needed when traveling abroad.