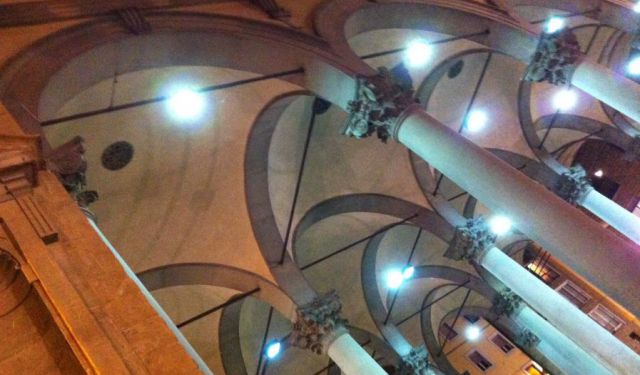 Unusual Punishment in the New Market, Florence, Italy (B)

In Florence’s New Market (the same one where the bronze pig resides) you can find leather goods and all kinds of souvenirs. But be careful about going there if you have any outstanding bills. This is where people were once punished for failing to settle their debts.

In the centre of Florence, the New Market, or il Mercato Nuovo in Italian, has been in the same location since the 16th century so it’s not really all that new. It was originally called the New Market to distinguish it from an older market which no longer exists.

It’s covered by an elegant loggia to keep the merchants and shoppers dry in inclement weather. At first, it was a market for silk and other luxury goods and had an upstairs room where the official measuring instruments were kept. If there was a dispute and someone claimed that a merchant was trying to cheat them. The official measure would be brought down to settle the matter.

Later it became the straw market where Florentine straw hats were sold. And today, leather and souvenirs are sold. But there’s something very interesting here that you can only see in the evening or early morning when the loggia is emptied of the portable market stalls that fill it every morning. ...... (follow the instructions below for accessing the rest of this article).
This article is featured in the app "GPSmyCity: Walks in 1K+ Cities" on iTunes App Store and Google Play. You can download the app to your mobile device to read the article offline and create a self-guided walking tour to visit the attractions featured in this article. The app turns your mobile device into a personal tour guide and it works offline, so no data plan is needed when traveling abroad.