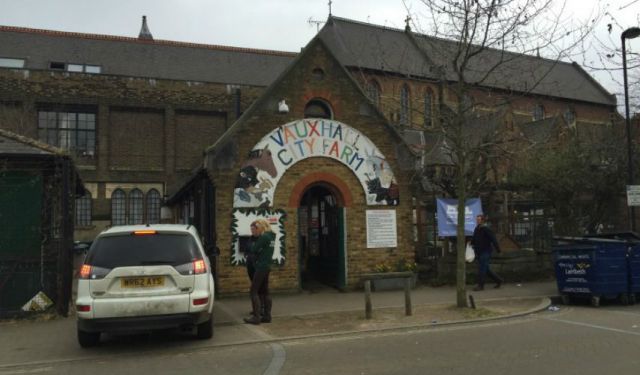 Just beyond Vauxhall train station, in the shadow of the MI5 headquarters is a family-friendly oasis you would find hard to believe existed in central London. It is a place filled with the sounds of…farm life. Not something you would associate with inner city life but there lies Vauxhall City Farm.

Until my friend suggested it as a meeting point for a play date, I had never heard of it before. Who would imagine that in such an urban area, there would be a farm? Believe it or not it has been there for 35 years, set up by local residents to provide a community space. London is just full of surprises.

After a five minute walk from the station we came to a pleasant pedestrianised area with a large patch of green space, a playground, a tea room and there in front of us was the farm. Outside two donkeys were grazing and an unassuming tatty sign indicated the entrance.

It’s only a small place but a surprising urban haven for children – which is free to explore. At first we encountered a giant rabbit, some chickens and happened to be there when one of the horses was having a haircut. The farm offers pony and horse riding for children, including the disabled, and is the most central riding school in London. ...... (follow the instructions below for accessing the rest of this article).
This article is featured in the app "GPSmyCity: Walks in 1K+ Cities" on iTunes App Store and Google Play. You can download the app to your mobile device to read the article offline and create a self-guided walking tour to visit the attractions featured in this article. The app turns your mobile device into a personal tour guide and it works offline, so no data plan is needed when traveling abroad.