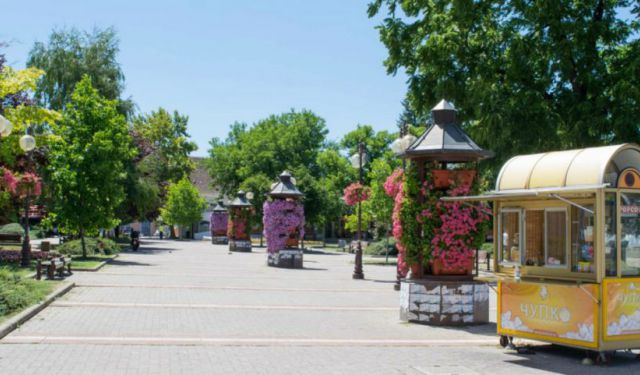 Situated in the far east of Serbia by the Romanian border sits the petite city of Vrsac. As part of my endeavours to see more of Serbia, I chose to venture out to see what the city was like. Not burdened with much information, Vrsac was pretty much a mystery to me. What I found there was another pleasant little Serbian city with hints of former glory. The chance to hike up to a scenic castle overlooking the town really sealed Vrsac as a memorable, off the beaten path destination.

Probably not all that surprising, Vrsac is a modest and compact city, home to 40,000 residents. The city centre is easily navigated on foot and features several elegant, traditional buildings. In front of many of these you’ll find bars and cafes, as is the Balkan way. If you’ve spent any time in the Vojvodina region of Serbia, the city will feel quite familiar.

One particularly eye-catching building is the sizeable City Hall. With its unusual brown and white colour scheme, the city hall is a pretty great example of Serbian reserved elegance. Another striking example nearby is the old pharmacy building that dates from the 18th century. For some unknown reason, I managed to miss the city’s main heritage building, the Bishop’s Court. ...... (follow the instructions below for accessing the rest of this article).
This article is featured in the app "GPSmyCity: Walks in 1K+ Cities" on iTunes App Store and Google Play. You can download the app to your mobile device to read the article offline and create a self-guided walking tour to visit the attractions featured in this article. The app turns your mobile device into a personal tour guide and it works offline, so no data plan is needed when traveling abroad.