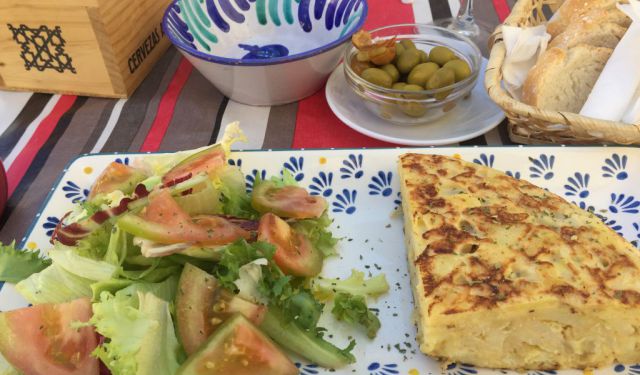 Views and Cobbled Streets: Walking in Albaicin, Granada, Spain (B)

I had an abortive attempt to climb up to Mirador San Nicolas, Granada’s most famous viewpoint, yesterday evening. Despite having Google Maps to hand on my iPhone, the maze of narrow little streets proved too much even for Google and I found myself going in circles; everytime I seemed close, I suddenly found I’d doubled the journey time. I gave up and headed back down to the restaurants on Paseo del Padre Manjon where I’d eaten the previous night and where there’s also a wonderful view of the Alhambra.

This morning after breakfast I decided to make another attempt. I carefully looked at my map and set off, quite early, just after 9am. It was wonderfully quiet everywhere, even Plaza Nueva empty.

Just past here, I took a left turn and started heading upwards. By that I mean up seriously steep cobbled alleyways.

The Albaicin is the Moorish district of Granada, just under the Alhambra, with hills raising up from the streets that follow the path of the Darro river to eventually offer views straight across to the palace. It’s my favourite part of the city; each time I leave the hotel I head that way. It’s full of little shops and bars and restaurants and at times it almost feels like being in the souks of Marrakesh (I got lost there too and my friend and I had to pay a small boy to take us back to the main square!). ...... (follow the instructions below for accessing the rest of this article).
This article is featured in the app "GPSmyCity: Walks in 1K+ Cities" on iTunes App Store and Google Play. You can download the app to your mobile device to read the article offline and create a self-guided walking tour to visit the attractions featured in this article. The app turns your mobile device into a personal tour guide and it works offline, so no data plan is needed when traveling abroad.