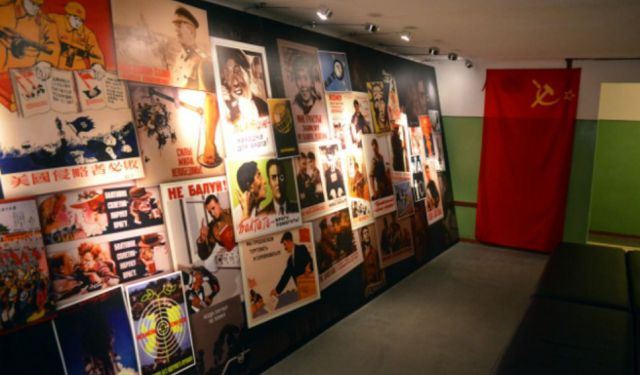 Visiting a Soviet Nuclear Missile Base in Lithuania, Plateliai, Lithuania (B)

When my friends told me they wanted to go to the Cold War Museum in Lithuania, I was like “Ok, sure.” But that’s because the museum has the worst possible name for what it really is: a decommissioned nuclear missile base. You’d think everyone would want to lead with that. A road trip through Lithuania is not complete without a visit to this old Soviet nuclear missile complex, now a Cold War Museum. It’s probably at least a 45 minute detour from wherever you’re headed but it’s worth every second.

In the 1960s, the Soviets built the Plokstine nuclear missile base and equipped it with enough nuclear power to level any city in Europe. Stationed deep in the countryside of Lithuania, the project was actually kept secret from the Lithuanian people. The missile complex houses four missile silos, one of which you can see in person during your visit. They’re all connected by a central command center, which is a massive underground bunker.

Little known fact: The missiles from this base were the ones sent to Cuba during the Cuban Missile Crisis via the Black Sea. So this little base in Lithuania played a critical but largely unsung role in this major worldwide crisis. ...... (follow the instructions below for accessing the rest of this article).
This article is featured in the app "GPSmyCity: Walks in 1K+ Cities" on iTunes App Store and Google Play. You can download the app to your mobile device to read the article offline and create a self-guided walking tour to visit the attractions featured in this article. The app turns your mobile device into a personal tour guide and it works offline, so no data plan is needed when traveling abroad.