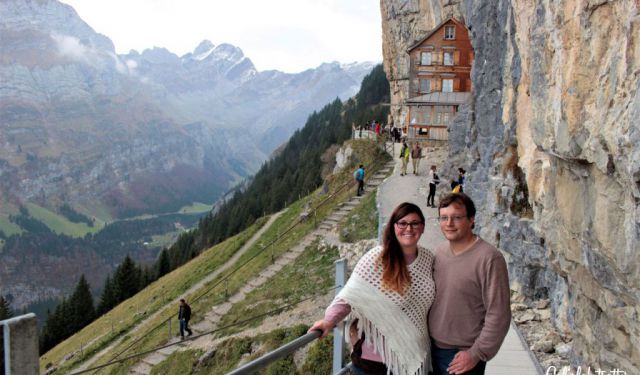 Visiting Appenzell & Hiking Ebenalp to the Aescher, Appenzell, Switzerland (B)

Just across the border from Germany in the region known as Appenzellerland, in the historic canton of Appenzell is Appenzell. Set in one of the most beautiful regions in Switzerland, surrounded by rolling landscape and the Alpstein mountains, Appenzell is often referred to as one of the most charming towns in Switzerland. Not far from here, perched high up in those mountains is quite possible the most amazing restaurant in the world, the Aescher on the Ebenalp, the northernmost summit of the Appenzeller Alps.

To celebrate our first anniversary as a married couple, we spent the day wandering around one of the most colorful towns in Switzerland before taking a cable car up the Ebenalp and doing a bit of hiking. We prosted to us and a successful first year of marriage at the famed Aescher with views to kill for.

The name Appenzell derives from the Latin word abbatis cella which translates to “estate of the abbot” referring back to the Abbey of St. Gall which had a massive influence on the development of the town. Between the 10th and 15th centuries, Appenzell was part of the abbey of St. Gallen before it finally gained its independence and joined the Swiss Confederation in 1513.  ...... (follow the instructions below for accessing the rest of this article).
This article is featured in the app "GPSmyCity: Walks in 1K+ Cities" on iTunes App Store and Google Play. You can download the app to your mobile device to read the article offline and create a self-guided walking tour to visit the attractions featured in this article. The app turns your mobile device into a personal tour guide and it works offline, so no data plan is needed when traveling abroad.