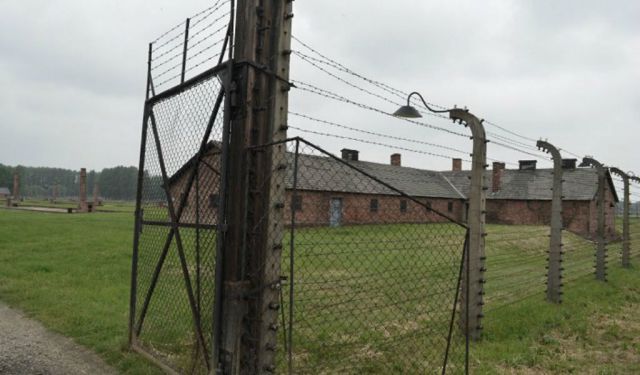 I lived in DC for two years and on my one and only attempt to visit the Holocaust Museum, I left crying before getting to the main exhibit. So I don’t know why I thought I could tour Auschwitz and Birkenau, the largest Nazi concentration camps, and be fine.

There are two ways to visit the camps from Kraków: with a tour or on your own. Most tours are anywhere from $25-30 and take you to both sites, and of course, transport you the hour and a half or so it takes to get there. In order to save money and because I had no interest in being a sobbing mess in front of a bus full of people for 8 hours, we went on our own.

The train from Kraków is $2 each way. The downside to the train is that the closest station, Oswiecim, is 20 minutes walking from Auschwitz. It’s not a bad walk but considering how much you have to walk at the sites, it’s better to avoid it. Luckily, there is a bus, Lajkonik, that also runs to and from Auschwitz that picks you up directly there. The bus ends up being a little bit faster, and hour and 15 minutes instead of 1:45 or 2 hours and costs $3.50. Since entrance to the camps is free, you really can’t get any cheaper than that to spend a day crying and reflecting on the atrocities that people inflict on other human beings. ...... (follow the instructions below for accessing the rest of this article).
This article is featured in the app "GPSmyCity: Walks in 1K+ Cities" on iTunes App Store and Google Play. You can download the app to your mobile device to read the article offline and create a self-guided walking tour to visit the attractions featured in this article. The app turns your mobile device into a personal tour guide and it works offline, so no data plan is needed when traveling abroad.