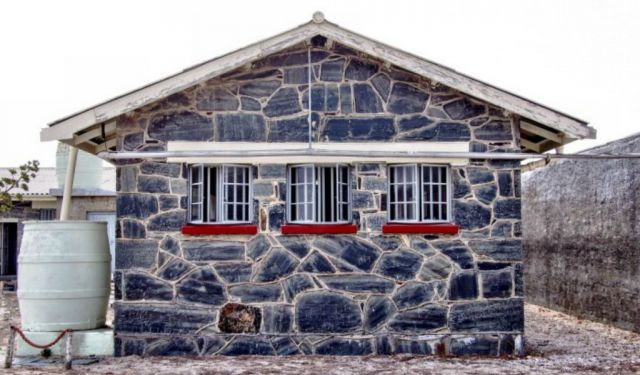 I got mixed reactions when talking to Capetonian’s about visiting Robben Island. Some said it was not to be missed. The rest shrugged it off. “It’s just our Alcatraz” was a response I received more than once.

Well I liked visiting Alcatraz and have a hard time comparing the two. Beyond both being Island jails in a scenic city, what do they have in common? Visiting Robben Island was always on my to do list as a must see sight. Now I was visiting Robben Island to see why some locals say to skip it.

As expected, visiting Robben Island is a popular excursion so booking your tour at ahead of time (a couple of days at least) is recommended. Boats depart daily from the Robben Island Museum in Cape Town’s waterfront at 0900, 1100, and 1300. – Not to be mistaken with the Jetty 1 which is where inmates used to depart from. Today it is a free museum and worth a visit while visiting the waterfront.

As the fog started to lift I could already tell that this was no Alcatraz. The first thing visiting Robben Island taught me was that it is huge. So much so that you are gathered onto tour buses to be taken around. On board our well spoken and oddly humorous guide pointed out the various sites on the island. Things relating to and not relating to it being used as a jail. This includes an asylum for leprosy patients, a military compound during World War II, guard quarters, and a rock query where inmates worked in blindly harsh conditions. ...... (follow the instructions below for accessing the rest of this article).
This article is featured in the app "GPSmyCity: Walks in 1K+ Cities" on iTunes App Store and Google Play. You can download the app to your mobile device to read the article offline and create a self-guided walking tour to visit the attractions featured in this article. The app turns your mobile device into a personal tour guide and it works offline, so no data plan is needed when traveling abroad.