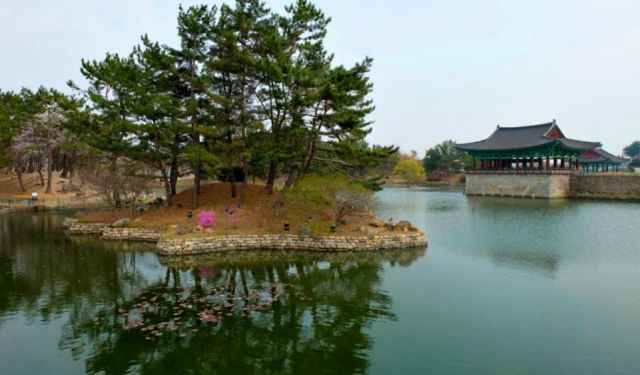 As soon as I had dumped my bags in Chacharang Guesthouse, I went out to explore the historic sites of Gyeongju City. Right next door was the northern portion of the Royal Tombs Park and that's where I started. This is the Noseo-dong area of the park where six tombs in different sizes are found. Five are shaped like hills, and one is shaped like a half moon. Among the items excavated from the half moon shaped tomb was a small gold crown. Thus, believed to be the tomb of a young member of the royal family.

South of the Noseo-dong Tombs Park is the Daerungwon Tombs Park. This area has four large tombs. The largest tomb in this area is the Hwangnamdaechong Tomb, which contains two tombs, believed to enshrine a royal couple. About 11,500 items were discovered in a tomb called Cheonmachong Tomb. Cheonmachong Tomb can be entered with an admission fee of 2000 won. But, as luck would have it, it was under restoration work at the time of my visit. Another tomb in Daerungwon is the tomb of King Michu, the 13th king ruler of the Silla Kingdom. Every year there is a commemoration held by his descendants. ...... (follow the instructions below for accessing the rest of this article).
This article is featured in the app "GPSmyCity: Walks in 1K+ Cities" on iTunes App Store and Google Play. You can download the app to your mobile device to read the article offline and create a self-guided walking tour to visit the attractions featured in this article. The app turns your mobile device into a personal tour guide and it works offline, so no data plan is needed when traveling abroad.