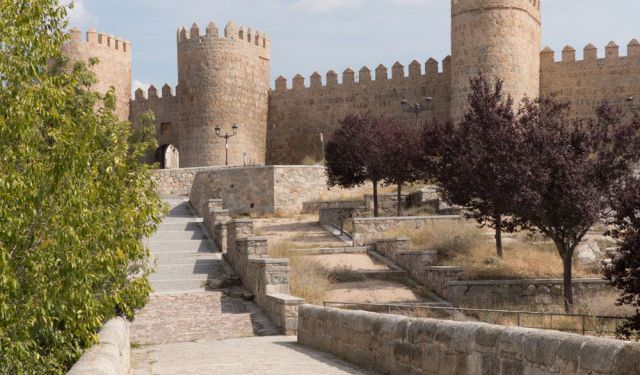 Walking Around the Medieval Walls of Avila, Avila, Spain (B)

Avila is often described as the “City of Saints and Stones”. The saint is St Teresa, and the stones are the city walls, supposedly the finest in the whole of Europe. Avila is also just a bus ride away from Segovia, where I was planning to visit the Roman remains. So I decided to find out if the medieval walls of Avila lived up to the hype.

As you’ll know if you follow this blog, I’ve been to lots of walled cities. Some of them have been complete circuits (like Avila), and there have been one or two where you can walk along the whole length of the walls (unlike Avila). But I have never seen walls as picture perfect as those of Avila. For one thing, they have been meticulously maintained so that the stone gleams in the Spanish sunshine. And, if you climb to a vantage point outside the town, the whole of the walled city is visible, guarding its inhabitants like a giant fortress.

The walls were built in the 11th century, to protect the residents from the Moors. It seems to have been a co-operative venture between different groups of citizens. Christians, Jews and even those Moors who lived inside the city all took a part in building and maintaining the defences. The walls have been well preserved since the Middle Ages, but work continues on making them safe and accessible to tourists. The walls and the old city of Avila became a UNESCO World Heritage Site in 1985. ...... (follow the instructions below for accessing the rest of this article).
This article is featured in the app "GPSmyCity: Walks in 1K+ Cities" on iTunes App Store and Google Play. You can download the app to your mobile device to read the article offline and create a self-guided walking tour to visit the attractions featured in this article. The app turns your mobile device into a personal tour guide and it works offline, so no data plan is needed when traveling abroad.