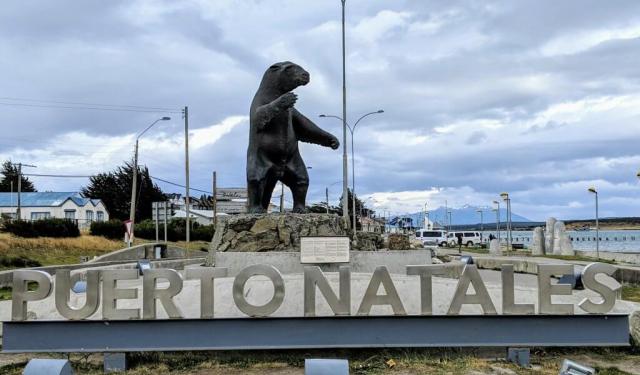 It’s easy to overlook Puerto Natalas. As the gateway to Patagonia, it sits in the shadow of the eighth natural wonder of the world at the base of Torres del Paine National Park. So hiking-booted folks often dash through the town on their way to see the great natural towers. But Puerto Natalas deserves some time, as this tiny town in the bottom of Chile fashions fun history around the story of big feet, “Patagonia.”

Like most other hikers to Patagonia, I hadn’t planned on spending many day-time hours in Puerto Natalas. My eyes, too, were set on grander vistas. But a bum knee kept me off a planned 15-mile hike, so I had to make the best of a lemons-to-lemonade day.

When the free walking tour guide didn’t show up, I took matters into my own hands. The Visitor’s Center staff provided a map with suggested highlights, and off I went on a 3-mile meander through town accompanied by a new friend from Spain I met on the sidewalk. She was also in the same situation as me.

Our first stop was the giant milodon, an ancient oversized sloth, in the middle of the street. It’s the welcoming gate to Puerto Natalas, and reminds folks that bones of this magical creation were found nearby. Granted, a full skelton has never been uncovered, so its the imagination of what a milodon might look like that welcomes adventurers to town. Around the milodon on this day was a pack of stray dogs monitoring traffic around this large dinosaur. It was more fun watching the dogs! ...... (follow the instructions below for accessing the rest of this article).
This article is featured in the app "GPSmyCity: Walks in 1K+ Cities" on iTunes App Store and Google Play. You can download the app to your mobile device to read the article offline and create a self-guided walking tour to visit the attractions featured in this article. The app turns your mobile device into a personal tour guide and it works offline, so no data plan is needed when traveling abroad.