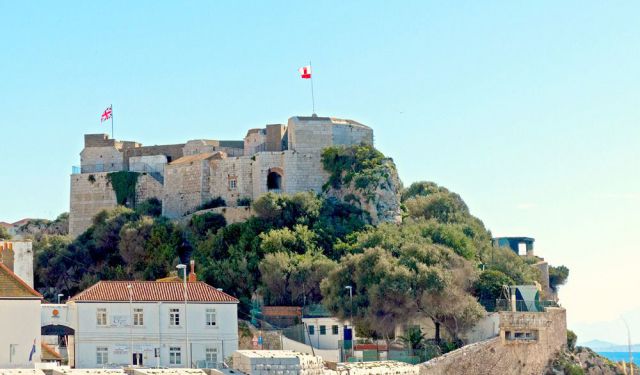 People have fought over the occupation of Gibraltar for centuries. In the last two millennia the Moors, the Spanish and the British have all had a foothold on the Rock, lured by its strategic location at the entrance to (or exit from) the Mediterranean. Defending the peninsula was always a priority, so it is not surprising that it should be riddled with walls and other fortifications.

The Moors held Gibraltar almost continuously from 711 AD until the Spanish conquered the Rock in 1492. Most of their effort went into protecting the northern part of the peninsula, the narrow strip of land between Gibraltar and Spain. To this end they constructed the Northern Walls and what is now known as the Moorish Castle. Built in the 12th century, the Moorish Castle was a massive fortress running down the side of the rock all the way to what is now Casemates Square. ...... (follow the instructions below for accessing the rest of this article).
This article is featured in the app "GPSmyCity: Walks in 1K+ Cities" on iTunes App Store and Google Play. You can download the app to your mobile device to read the article offline and create a self-guided walking tour to visit the attractions featured in this article. The app turns your mobile device into a personal tour guide and it works offline, so no data plan is needed when traveling abroad.