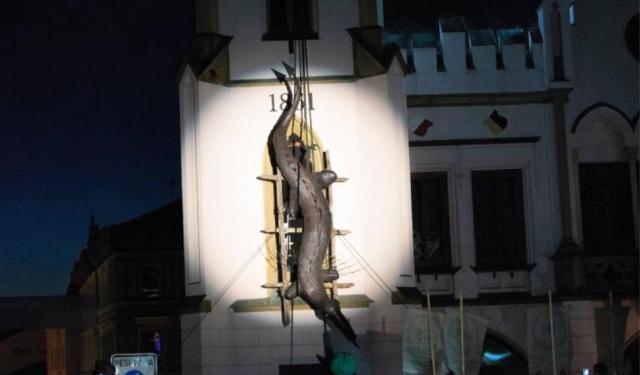 Watching a Dragon Be Vanquished in Trutnov, Trutnov, Czech Republic (B)

When you travel I think one of the best surprises you can be met with is a local festival. You turn up and the place is unexpectedly lively, with people everywhere and something fun definitely happening. Sure it helps if you understand what’s going on but I don’t think it’s entirely necessary. That’s essentially what happened to me when I arrived in the city of Trutnov in the northern Czech Republic. I was only staying in Trutnov as a base for visiting the Adršpach-Teplice Rocks National Park, but I got much more than I bargained for when I arrived for the local festival of “Už ho nesou“.

If you haven’t heard of the city of Trutnov in the Czech Republic, I can’t blame you. The city is only of a modest size and far enough from the Czech Republic’s hot spots that not many foreign tourists are likely to pass that way. The only other tourists I encountered in Trutnov were passing through for the Adršpach-Teplice Rocks and even then I don’t think they were staying in the city. The city is very much a gateway to the national park so I don’t think too many foreigners come for Trutnov on its own. ...... (follow the instructions below for accessing the rest of this article).
This article is featured in the app "GPSmyCity: Walks in 1K+ Cities" on iTunes App Store and Google Play. You can download the app to your mobile device to read the article offline and create a self-guided walking tour to visit the attractions featured in this article. The app turns your mobile device into a personal tour guide and it works offline, so no data plan is needed when traveling abroad.