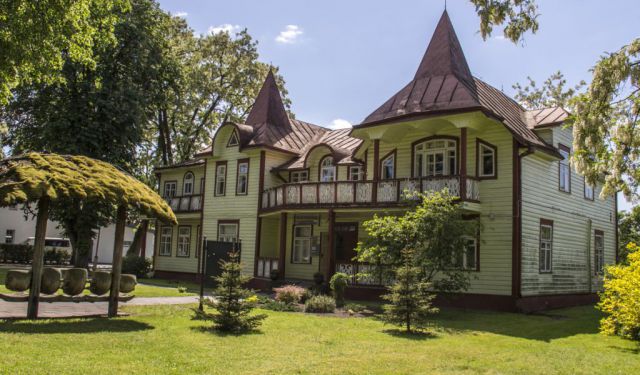 Water and Whales in Birstonas a Spa Town in Lithuania, Birstonas, Lithuania (B)

Birstonas, a pretty spa town in Lithuania, nestles in a loop of the River Nemunas. It is a town within a park of trees, grass and flowers, the Nemunas Loop Regional Park, and owes its prosperity to the mineral waters that flow beneath it. It guards these precious waters through the belief that they are protected by a mythical whale. When the curative properties of the waters were discovered Lithuania was part of Tsarist Russia and was granted permission to establish a resort at Birstonas.

During the First World War this resort was destroyed but its fortunes were revived in 1924 when the Red Cross became interested in the area and established the first mud baths (still operational as the Tulpes Sanatorium). Around the same time a concrete statue of a whale was placed on the spot where the Vytautas spring (the most important) was discovered. In 1959 when the Kaunas hydroelectric power plant was build downstream the water level in the River Nemunas was raised and the whale was submerged. ...... (follow the instructions below for accessing the rest of this article).
This article is featured in the app "GPSmyCity: Walks in 1K+ Cities" on iTunes App Store and Google Play. You can download the app to your mobile device to read the article offline and create a self-guided walking tour to visit the attractions featured in this article. The app turns your mobile device into a personal tour guide and it works offline, so no data plan is needed when traveling abroad.