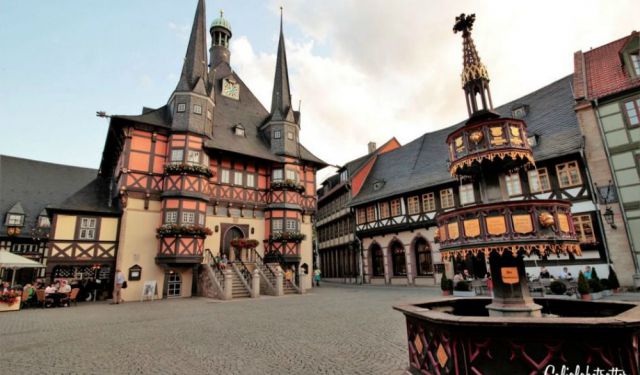 Wernigerode the Heart of the Harz, Wernigerode, Germany (B)

In Germany, you don’t have to look very far before you find a fairy tale village! If you have to, you’re clearly doing something wrong!

The Harz Mountains of northern Germany are shrouded in mystique and legends of witches and warlocks cavorting about with the Devil himself up at the Brocken on Walpurgisnacht (April 30th) every year. In the center of it all, along the German Timber-Frame Road (Deutsche Fachwerkstraße) is the exquisitely picturesque town of Wernigerode. With a plethora of more half-timbered houses, it was a no brainer that we would hit up this quaint little town in Saxony-Anhalt.

Wernigerode is also the main pick up point for hoppin’ aboard the Harzquerbahn railway, the historic steam trains that chug-a-lugs their way through the Harz Mountains up to the Brocken.

It’s unknown when or why the town was founded. Like most of the towns in this area, the town prospered because of the surrounding silver and copper mines. The first area to be settled was Klint, where a castle once stood which was later demolished. At the time of the first settlement, there was an ancient forest which needed to be “cleared”, hence the suffix – rode on the town’s name – a common theme you’ll find in the names of many towns in the area. ...... (follow the instructions below for accessing the rest of this article).
This article is featured in the app "GPSmyCity: Walks in 1K+ Cities" on iTunes App Store and Google Play. You can download the app to your mobile device to read the article offline and create a self-guided walking tour to visit the attractions featured in this article. The app turns your mobile device into a personal tour guide and it works offline, so no data plan is needed when traveling abroad.