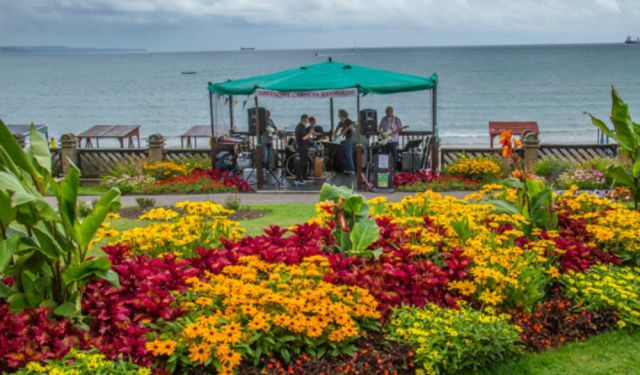 Weymouth in Dorset - a Royal Favourite, Weymouth, England (B)

After King George III visited Weymouth on the Dorset coast in 1789 and declared “I never enjoyed a sight so pleasing.” this seaside town has been a popular place for holidaymakers. Thereafter George III, who suffered ill-health, regularly visited the town. It was during his reign that fresh air and bathing in the sea became recognised as being beneficial for good health and a cure for tuberculosis. King George himself swam in the sea. In those days, people changed in a bathing hut on wheels that was then dragged into the sea to allow the occupant to slide discretely into the water. A replica of the bathing hut used by King George III is displayed at the far end of the wide Esplanade that runs alongside the extensive sandy beach.

The regular presence of a king in town sparked a frenzy of building which is reflected in the names of pubs and hotels – the George Inn and the Royal Hotel are just two examples. Lest visitors to Weymouth forget its most famous patron a large monument was erected in the centre of town. Erected in 1810 at the junction of the two main streets of the town, St Mary Street and St Thomas Street, it stands on an island in the middle of the road ...... (follow the instructions below for accessing the rest of this article).
This article is featured in the app "GPSmyCity: Walks in 1K+ Cities" on iTunes App Store and Google Play. You can download the app to your mobile device to read the article offline and create a self-guided walking tour to visit the attractions featured in this article. The app turns your mobile device into a personal tour guide and it works offline, so no data plan is needed when traveling abroad.