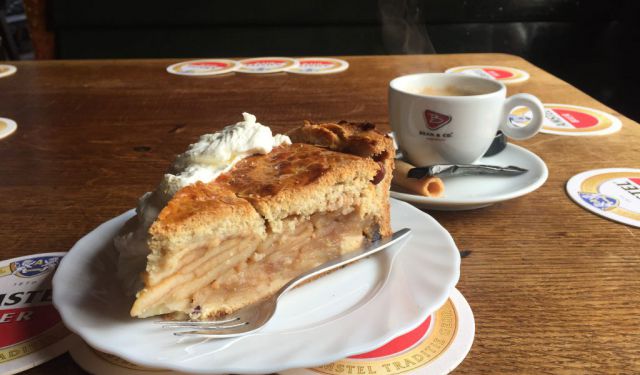 Dutch cuisine doesn’t have a particularly good reputation, but just as there has been a phenomenal change for the better in British cuisine in the last decade or two, I think the Dutch also deserve some recognition for the great food that can now be found there. Well, certainly in Amsterdam.

Much as many non-Brits think we live on fish and chips and roast beef, a lot of people think the Dutch live on herrings and cheese. Certainly some of the traditional Dutch dishes like meat croquettes, deep-fried meatballs (bitterballen) and uninteresting toasties are not much to my taste, but the Dutch, like the Brits, have adopted a more cosmopolitan attitude to food now and you can find excellent food with modern twists and influences from other countries. That said, I think it’s nice to seek out some of the traditional dishes or at least know what kind of foods are typical of the region. There is a strong seafaring history, and the sea itself is rarely far away, even from Amsterdam, which means fish and seafood are popular – and some of the best you’ll find anywhere. There’s also a lot of Indonesian food – a by-product of the days of colonisation when the Dutch sailed East and brought back spices. If you want to go Dutch in your eating while in Amsterdam, then here’s what to look out for and some of the places I like best. ...... (follow the instructions below for accessing the rest of this article).
This article is featured in the app "GPSmyCity: Walks in 1K+ Cities" on iTunes App Store and Google Play. You can download the app to your mobile device to read the article offline and create a self-guided walking tour to visit the attractions featured in this article. The app turns your mobile device into a personal tour guide and it works offline, so no data plan is needed when traveling abroad.

Create Your Own Self-Guided Walks in Amsterdam
Guide Name: What to Eat and Where in Amsterdam
Guide Location: Netherlands » Amsterdam
Guide Type: Self-guided Walking Tour (Article (B))
Author: Kay Gale
Read it on Author's Website: https://travel-gourmet.com/2017/01/25/what-to-eat-and-where-in-amsterdam/
Sight(s) Featured in This Guide: