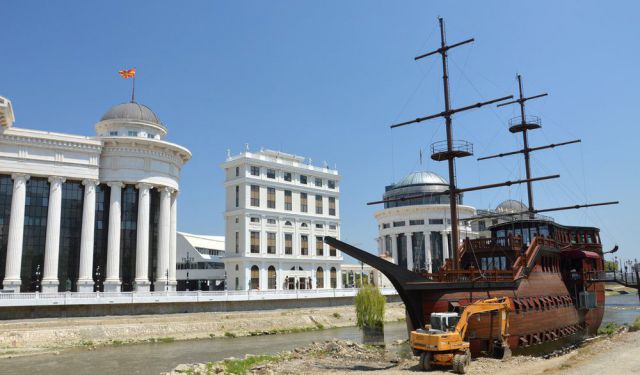 What to See in Skopje - Europe's Most Chaotic Capital, Skopje, Macedonia (B)

Before exploring Skopje deeper, we caught a glimpse of this city while on the way from Belgrade to the beautiful Ohrid – a lakeside town boasting unique architecture, clear waters and nice, calm beaches. It was such a pleasure to be there on a sunny, summer day.

Skopje was a different story. It wasn’t very welcoming at first. The grey, gloomy facade that consisted of communist era blocks defined its borders. At first, I thought the two days we had there were going to be a waste of time. However, I couldn’t be more mistaken. Don’t get me wrong – I wouldn’t say that Skopje is the most beautiful city in Europe, because it isn’t. But its charm was hidden in the fact that I have never seen such a diverse, crazy and chaotic city anywhere else in Europe.

Because the Balkan Peninsula is filled with tiny countries, it’s not a problem to reach Skopje from any of them. We came here all the way from Belgrade on a night bus. It wasn’t the most pleasant journey – but still, we got safe and sound in our destination. ...... (follow the instructions below for accessing the rest of this article).
This article is featured in the app "GPSmyCity: Walks in 1K+ Cities" on iTunes App Store and Google Play. You can download the app to your mobile device to read the article offline and create a self-guided walking tour to visit the attractions featured in this article. The app turns your mobile device into a personal tour guide and it works offline, so no data plan is needed when traveling abroad.