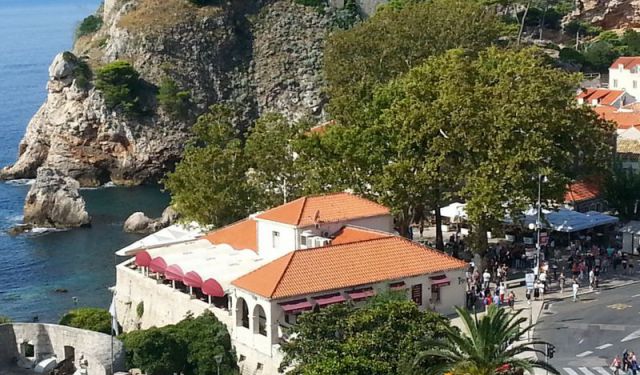 What We Learnt on a Walking Tour of Dubrovnik, Dubrovnik, Croatia (B)

What better way to learn about Dubrovnik than with a complimentary guided tour by Sandra Milovcevic, the Public Relations Department Co-ordinator, from the Dubrovnik Tourist Board. We caught up with Sandra one afternoon at 4pm when the crowds were dissipating at Pile Gate on the Western side of the Old City Walls. Pile Gate is the hub of Dubrovnik, it is where the buses depart from, tour groups meet and where the Dubrovnik Tourist Board has one of their Offices.

Sandra was very passionate about her home town of Dubrovnik and we spent the next hour enjoying her company and her sense of humor whilst learning about “The Pearl of the Adriatic” – Dubrovnik.

The City Walls are 1,940m in length. They are the biggest and the best preserved in the whole of Europe.

Can you believe this? The City Walls were built between the 11th and 15th century to defend the city, but they never saw a war or an evasion until 1991 when Dubrovnik came under attack from Serbia. If you were a visitor to the city during its construction you were required to bring stone with you from the outlying areas of Dubrovnik as your entrance fee to the city. ...... (follow the instructions below for accessing the rest of this article).
This article is featured in the app "GPSmyCity: Walks in 1K+ Cities" on iTunes App Store and Google Play. You can download the app to your mobile device to read the article offline and create a self-guided walking tour to visit the attractions featured in this article. The app turns your mobile device into a personal tour guide and it works offline, so no data plan is needed when traveling abroad.