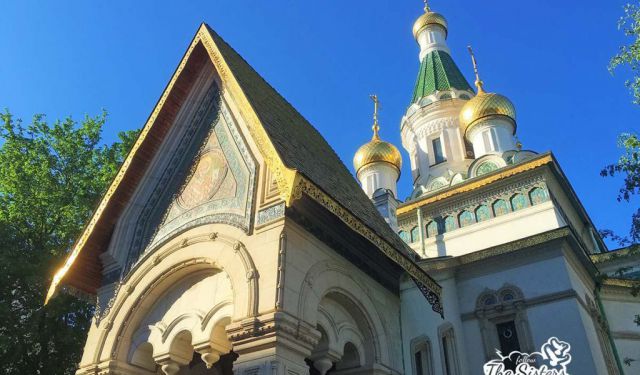 What’s so Special About the Russian Church in Sofia?, Sofia, Bulgaria (B)

You know this church – you’ve seen it on so many pictures. It is a gorgeous building in the very heart of Sofia, standing there to remind us (and our guests) that Bulgaria and Russia have a common past.

But this isn’t what makes the church so special. Nor are the tulips, nor its golden domes (although they do add to its charm). There’s a reason which makes Bulgarians from all over the country go there just to leave a letter addressed to a person who is no longer amongst us. But we’ll get to this a little later.

This church, which we all recognize as the Russian, is actually named after St. Nicolas and the exact name is Church of St Nicholas the Miracle-Maker. It is built on a piece of land owned by the Russian embassy in Sofia and was aimed to serve only the Russian immigrants in Bulgaria.

But why did they need a separate church? Aren’t Russians Christian Orthodox just as Bulgarians? In case this is what you’re thinking, then you’re absolutely right. The problem was that Bulgarian communist party tried to erase Christianity from the hearts of Bulgarians (yet another thing the regime failed at). I still have no idea what their motivation was, but I do know that people were not allowed to attend masses, have their children christened, nor even have a priest on funerals. At some point, things became so bad, that on all religious holidays churches were surrounded by the police to ensure no one walks in. ...... (follow the instructions below for accessing the rest of this article).
This article is featured in the app "GPSmyCity: Walks in 1K+ Cities" on iTunes App Store and Google Play. You can download the app to your mobile device to read the article offline and create a self-guided walking tour to visit the attractions featured in this article. The app turns your mobile device into a personal tour guide and it works offline, so no data plan is needed when traveling abroad.