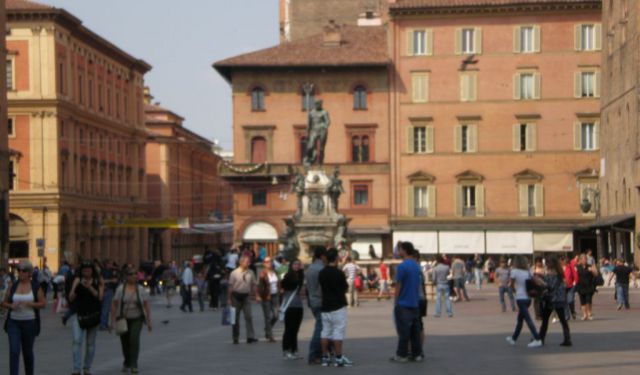 Falling in love is a mysterious process over which we do not have any control. Whether you fall in love with a person, an animal, a book or a city it’s very difficult to explain what was it that attracted you in the first place. My faithful readers know how crazy I am about London but can you guess what’s my favourite Italian city?

I have been fortunate enough to have travelled widely around Italy. I got lost in Venice. I got annoyed by tourists in Florence. I ate chocolate in Turin. I wandered around Milan. I was surprised by Naples. I admired the Pantheon in Rome. And I’ve visited many many other Italian cities and villages. But there’s only one where I can imagine myself living. Only one that stole my heart all those years ago. That city is BOLOGNA. The city famous for its gastronomy and the red roofs and the oldest university in Europe (1088) and the leftist politics.

I visited Bologna for the first time in 2004 and spent a week with my best friend and other students from all around Europe. We were shown the city by our fellow Italian students and we got to experience Bologna as locals do. What was it that made me fall in love with Bologna? Maybe the fact that the city is full of young and students. That it isn’t overcrowded by tourists such as Florence and Venice. That it has a lot of beautiful cultural monuments such as Piazza Maggiore and the Two Towers. I loved walking around Bologna under its porticoes shielded from the sun (and rain). I loved the energy of the city, the feel of it, the food. But most importantly I enjoyed having fun in Bologna with my friend and other students. During my week in Bologna I got to climb the Asinelli tower and buy university T-shirt, visit the Ducati museum, have the best pizza in the world, do some wine tasting, eat lots of gelato, walk around the streets and learn about Bologna’s history, dance, go mountain climbing and visit Florence. Who knows, maybe if I had visited Bologna in different circumstances I wouldn’t have liked it that much but I’m not sure about that since I’ve had lots of fun in other Italian cities with friends too but I didn’t get that same feeling about a city. I’ve visited Bologna again in 2006 and walked all the way to Basilica di San Luca. I also bought a book The Broker by John Grisham in an English bookstore. The book is set in Bologna and it was fun to read it and to say to myself.I have walked down those streets too. Since then I spent a few hours in Bologna ...... (follow the instructions below for accessing the rest of this article).
This article is featured in the app "GPSmyCity: Walks in 1K+ Cities" on iTunes App Store and Google Play. You can download the app to your mobile device to read the article offline and create a self-guided walking tour to visit the attractions featured in this article. The app turns your mobile device into a personal tour guide and it works offline, so no data plan is needed when traveling abroad.