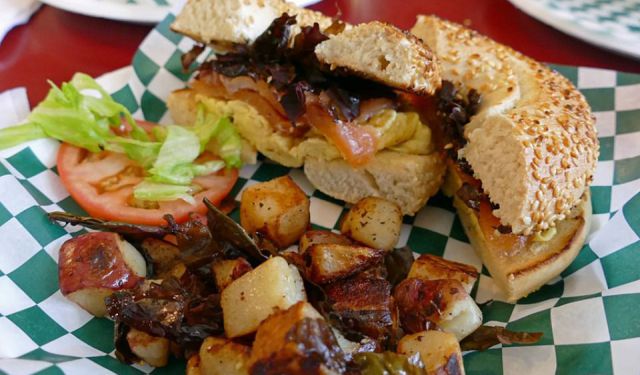 When I visited Saint John earlier this year I had no idea what a gastronomic treat I was in for. As I expected, I found fresh and tasty seafood, but I also discovered delicious curries, excellent craft beers and ciders, and melt-in-the-mouth desserts. I left Canada with no doubt that Saint John’s food scene is flourishing and on the up.

Possibly the dish most associated with the Maritimes is the lobster roll, and I’ve two great suggestions here of where you should eat these. Dulse, a seaweed I first came across in Northern Ireland, also grows along the coast of New Brunswick and Nova Scotia, and is eaten dried as a snack or in a sandwich (or a bagel in Slocum and Ferris). British dishes, such as bangers and mash and fish and chips, are also popular.

Saint John, however, isn’t just about the traditional. There are some fabulous restaurants, such as Port City Royal, putting a new spin on old dishes. And, at Queen’s Square Farmers’ Market, I found cuisines as ethnically diverse as the people of Saint John, with food stalls from Nigeria, Cameroon, Thailand, Mexico, Haiti and Syria. ...... (follow the instructions below for accessing the rest of this article).
This article is featured in the app "GPSmyCity: Walks in 1K+ Cities" on iTunes App Store and Google Play. You can download the app to your mobile device to read the article offline and create a self-guided walking tour to visit the attractions featured in this article. The app turns your mobile device into a personal tour guide and it works offline, so no data plan is needed when traveling abroad.