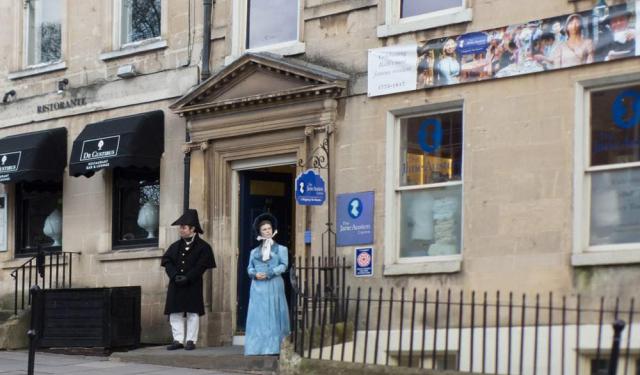 Where to Find Jane Austen in Bath, Bath, England (B)

Even if you’ve never read any of her novels, the chances are that you associate Jane Austen with Bath. As for most people of her time and social class, Bath was an important part of Jane Austen’s world, and she mentioned it in all of her novels. Two of the books –Persuasion and Northanger Abbey – have a substantial part of their action in the city.

Many people decide to read (or re-read) Jane Austen’s work before a visit to Bath. The stories are worth reading in their own right as an amusing exposition of social interaction and manners, but they give an insight into the life of Georgian England. And Georgian England is what you see when you come to Bath, with much of the architecture dating from that period. As you walk part the grand crescents and colonnaded buildings it is easy to imagine that you are back in that era, mingling with the cream of society.

The obvious place to start is at the Jane Austen Centre on Gay Street. You are drawn into the Georgian period straight away, with staff dressed as Jane Austen characters: we were greeted at the door by Captain Wentworth (from Persuasion) and shown round by Caroline Bingley (from Pride and Prejudice). The house is decorated in the fashion of the early 19th century, and music by Handel (who Austen admired) was playing in the reception area. ...... (follow the instructions below for accessing the rest of this article).
This article is featured in the app "GPSmyCity: Walks in 1K+ Cities" on iTunes App Store and Google Play. You can download the app to your mobile device to read the article offline and create a self-guided walking tour to visit the attractions featured in this article. The app turns your mobile device into a personal tour guide and it works offline, so no data plan is needed when traveling abroad.