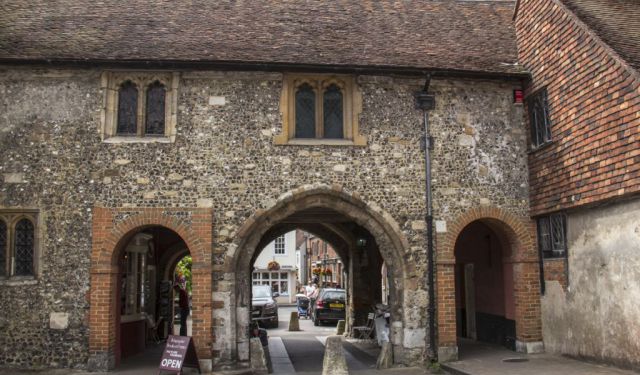 Winchester in Hampshire, England is a very popular tourist destination. Every day coach loads of visitors arrived and depart on Broadway in the city centre. These comings and goings are watched over by an imposing figure – the Anglo-Saxon King, Alfred the Great. His statue, created by Hamo Thornycroft, was placed there in 1901 to celebrate one thousand years since Alfred died. He became king of England and made Winchester his capital in 871. He ruled Wessex until his death in 899. Alfred had successfully defended Wessex, a region of Southern England, against attacks from the Vikings and whoever ruled Wessex inherited the title of King of England. The unveiling of this statue was a momentous occasion and multiple celebrations were enjoyed by the whole town.

Alfred established a defensive system to protect his kingdom. Winchester was rebuilt and people were encouraged to settle there. The town prospered and when the growing population became too large for its Saxon cathedral, the Old Minster, the New Minster (next to the Old Minster) and Nunnaminster were founded. Later renamed Hyde Abbey and St Mary’s Abbey these two institutions soon became the most important centres for art and learning in England. Alfred died before the New Minster was completed and was buried in the Old Minster. His son, Edward the Elder, completed the building of the New Minster and Alfred’s body was moved there. At the beginning of the twelfth century the Old Minster was enlarged to become the first cathedral of Winchester. To make room for the new cathedral the New Minster was moved to the suburb of Hyde and became known as Hyde Abbey. The bodies of Alfred, his wife and his son were moved there and buried before the high altar. Today, thanks to the destruction that took place during the Dissolution of the Monasteries by Henry VIII all that remains of the original abbey is the attractive fifteenth century gatehouse. Adjoining this gatehouse is a medieval barn containing twelfth century stonework.  ...... (follow the instructions below for accessing the rest of this article).
This article is featured in the app "GPSmyCity: Walks in 1K+ Cities" on iTunes App Store and Google Play. You can download the app to your mobile device to read the article offline and create a self-guided walking tour to visit the attractions featured in this article. The app turns your mobile device into a personal tour guide and it works offline, so no data plan is needed when traveling abroad.