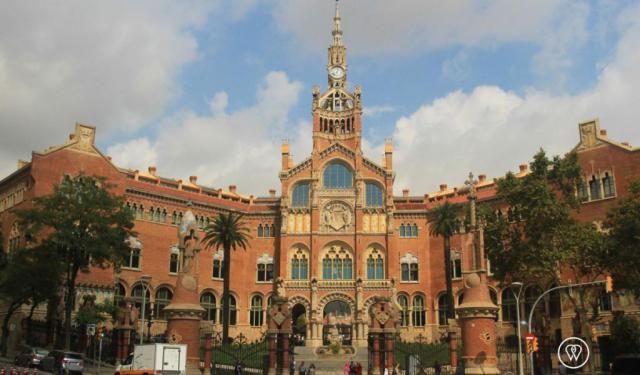 The Sant Pau Art nouveau site is off the very beaten path of the modernist landmarks of Barcelona. A stone’s throw away from La Sagrada Familia, it is an impressive hospital that was built in the early 20th century and one of the most beautiful examples of modernist architecture.

At the turn of the 20th century, the population of Barcelona was rapidly growing and lacking a modern hospital. The 1401 Santa Creu hospital (the hospital of the Holy Cross) that had been in function for five centuries in the gothic heart of Barcelona was outdated. A new hospital was greatly needed.

Born and raised in Barcelona, and living in Paris where he got inspired by Lariboisière, the banker Paul Gil i Sera (1816-1896) became a generous benefactor and devoted a big part of his fortune to the construction of a new modern hospital in his hometown. It will take almost 30 years to be completed thanks to Paul Gil, and also other families and anonymous benefactors whom chipped in once the money ran out in 1912, 10 years after the start of the construction (and hardly a fourth into the original plan). ...... (follow the instructions below for accessing the rest of this article).
This article is featured in the app "GPSmyCity: Walks in 1K+ Cities" on iTunes App Store and Google Play. You can download the app to your mobile device to read the article offline and create a self-guided walking tour to visit the attractions featured in this article. The app turns your mobile device into a personal tour guide and it works offline, so no data plan is needed when traveling abroad.