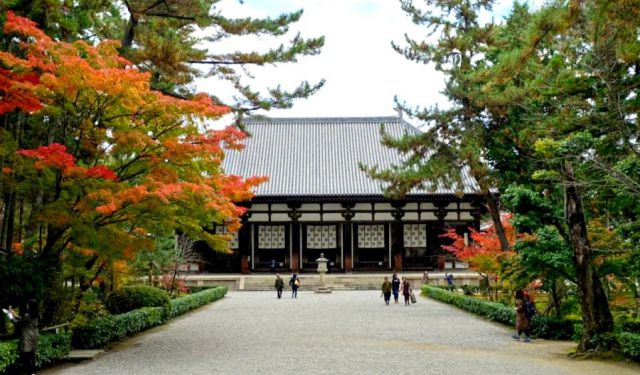 This day is filled with UNESCO World Heritage Sites, five to be exact. After spending my morning visiting more-than-a-millenium-old wooden structures in Horyuji and Hokkiji in Ikaruga Town, I return to Nara City to visit two temples and a palace (or more accurately, its remains).

The bus lets me and two Japanese women alight at the bus stop for Yakushiji, by a large but near-empty parking area. 'Ah, good', I think to myself, 'not too many tourists here.' I follow my map and walk by a dozen vending machines all in a row and two small Shinto shrines (Yasumigaoka-hachimangu and Magotaro Inari) devoid of worshippers and visitors before I reach the south gate of Yakushiji.

Emperor Tenmu started the construction of Yakushiji in the year 680 in Asuka (a town south of Nara), as an offering and prayer for the recovery of his wife, but, ironically, it was he who died first. His empress continued the construction of the temple and it was completed in the year 698. When the capital was moved to Nara in 710, Yakushiji was also moved to the present site eight years later. ...... (follow the instructions below for accessing the rest of this article).
This article is featured in the app "GPSmyCity: Walks in 1K+ Cities" on iTunes App Store and Google Play. You can download the app to your mobile device to read the article offline and create a self-guided walking tour to visit the attractions featured in this article. The app turns your mobile device into a personal tour guide and it works offline, so no data plan is needed when traveling abroad.