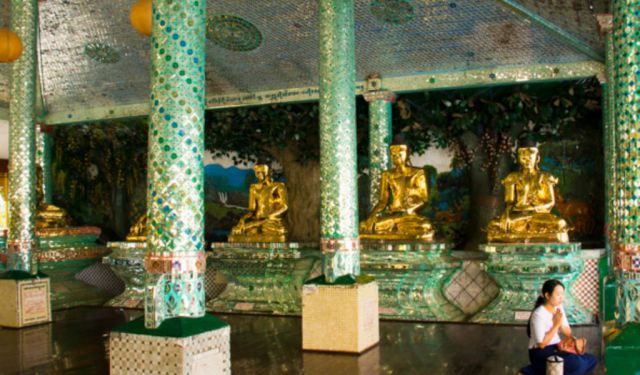 Yangon and a Trio of Temples, Yangon, Myanmar (B)

Despite a constant ebb and flow of visitors Shwedagon Paya in Yangon (also known as Rangoon) was a place of peace and serenity. Clusters of individuals worshipped in silence around the many small shrines offering up beautiful fresh flowers and fabulous foil decorations. The soft murmur of voices drifted from the open shaded areas around the perimeter as families and friends enjoyed picnics together. This was a place of pilgrimage and some would have journeyed a long way to worship here at the most important Buddhist temple in Myanmar.

Before we could enter the temple we had to take our shoes off which is a requirement for all Buddhist temples. I wished I had worn some slip on sandals rather than socks and trainers as my sensible attire was particularly tiresome when putting them back on again but our driver seemed to have an inexhaustible supply of wet wipes. As we waited for our tickets to be purchased we were amused by the sign that said that ‘spaghetti dresses’ were forbidden – having been forewarned we were all properly dressed with shoulders and knees covered. The admission fee, which goes to the government, includes a lift ride to the raised platform of the stupa. Most local visitors walk up the stairs of one of the four long graceful entrances, by far the more exciting method of entry, but we did not have time. Only two of the entrances have lifts and we took the one to the south entrance where we began our circuit of the stupa. Even though it was still early it soon became very hot but help was on hand and red carpets were rolled out to protect our bare feet from the hot marble paving stones. ...... (follow the instructions below for accessing the rest of this article).
This article is featured in the app "GPSmyCity: Walks in 1K+ Cities" on iTunes App Store and Google Play. You can download the app to your mobile device to read the article offline and create a self-guided walking tour to visit the attractions featured in this article. The app turns your mobile device into a personal tour guide and it works offline, so no data plan is needed when traveling abroad.