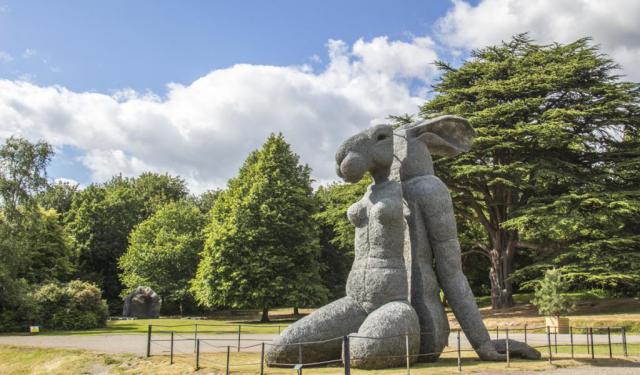 Yorkshire Sculpture Park - The Only One of Its Kind, Wakefield, England (B)

The Yorkshire Sculpture Park is an international centre for modern and contemporary art featuring some of the world’s finest artists. Their work is displayed in displayed in the open-air and its four galleries. This glorious park occupies the huge historic estate that once surrounded the beautiful Bretton Hall built in the Palladian style of architecture.

Sir William Wentworth, a member of the Yorkshire gentry, built Bretton Hall in 1720. When his illegitimate grand daughter, Diana Beaumont, inherited the estate from her father at the beginning of the nineteenth century she extended the mansion and its outbuildings. But Diana was very unpopular and when the estate passed to her son, Thomas Wentworth Beaumont, he sold everything that reminded him of his mother. But he did re-invest the money in the estate which was owned by the Beaumonts until 1948 when most of it was sold to West Riding County Council. The mansion became a training college, Bretton College, and later, in 2001 it became part of the University of Leeds. The college closed down in 2007 and the buildings were sold to Wakefield Council and came under the management of the sculpture park. The mansion has remained empty since then although it is now being restored and converted into a luxury hotel. ...... (follow the instructions below for accessing the rest of this article).
This article is featured in the app "GPSmyCity: Walks in 1K+ Cities" on iTunes App Store and Google Play. You can download this article for FREE and read it offline on your mobile device.