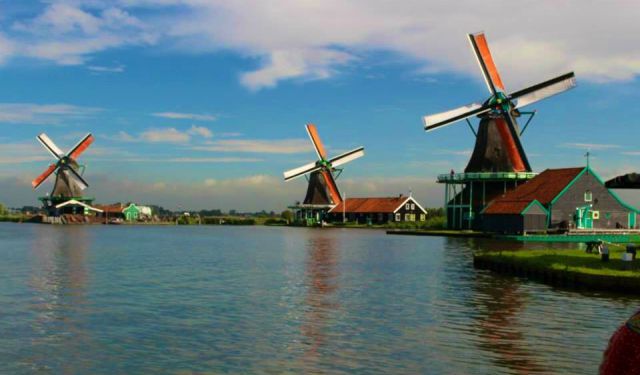 One of the best parts about visiting the Netherlands is getting to explore beyond just Amsterdam and truly experience what it was like to live in a little Dutch settlement. Zaanse Schans is just a hop, skip and a jump away from all the hustle and bustle of the capital and offers so much more than just windmills! Today, you can see traditional Dutch homes, barns, windmills and even enjoy a glimpse into the life of a clog & cheese making!

It is one of the world’s oldest industrial areas which has only 17 windmills that remain from the 1000 that had been built during the 18th & 19th centuries. Originally, these windmills were created to help keep the settler’s feet dry but over time, the windmills were turned into industrial machines which pumped out barley, rice, paper, wood, cooking oil, mustard, tobacco, hemp and even paint!

We stopped here on our way out of Amsterdam before heading back to Germany. We followed our GPS navi which took us the back way into the Dutch village, so we were able to park our car in a small dirt parking lot and walking straight up to the windmills. I have previously been here before and the bus and train will drop you off on the other side of the river in a small town. From here you have to take a small ferry boat over the river which will drop you off on the side with the windmills. ...... (follow the instructions below for accessing the rest of this article).
This article is featured in the app "GPSmyCity: Walks in 1K+ Cities" on iTunes App Store and Google Play. You can download the app to your mobile device to read the article offline and create a self-guided walking tour to visit the attractions featured in this article. The app turns your mobile device into a personal tour guide and it works offline, so no data plan is needed when traveling abroad.