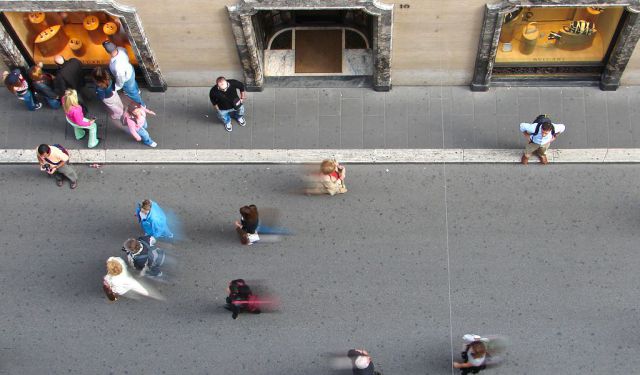 Turn back the clock about 2,000 years and Campo Marzio was just outside ancient Rome, a neutral ground where ambassadors were received. Today, it is one of the most desirable neighborhoods in the city, home to a clutch of ancient monuments and some fantastic shopping. The neighborhood is a magnet for fashionistas and the well-heeled and is known as Rome's 21st-century dolce vita. This translates as "sweet life".

Indulge in some expensive retail therapy at Via Condotti, a road named after the channels that used to carry water to the ancient Roman Baths of Agrippa. This is considered by many to be the poshest shopping street in Rome. Here you will find the likes of Prada, Gucci and Bulgari as well as jewelers, specialty stores, antique dealers and art galleries. When you walk down the pedestrian-only Via Borgognona, you will notice lots of wealthy, elegantly dressed people from all over the world. The stores here are a cut above the rest and include numerous fashion houses, such as Dolce & Gabanna, Fendi and Laura Biagiotti. Connecting Piazza del Popolo with the Spanish Steps is Via del Babuino, a chic and stylish street of luxury shops. Antique hunters head for the stores on Via Margutta, a street made famous by the Audrey Hepburn film Roman Holiday.
Image Courtesy of Flickr and Marcel Oosterwijk.
How it works: A discovery walk features a route using which you can explore a popular city neighborhood on your own. This walk, along with other self-guided walks in over 1,000 cities, can be found on the app "GPSmyCity: Walks in 1K+ Cities" which can be downloaded from iTunes App Store or Google Play to your mobile phone or tablet. The app's built-in GPS navigation functions allow following this walk route with ease. The app works both online and offline, so no data plan is needed when traveling abroad.