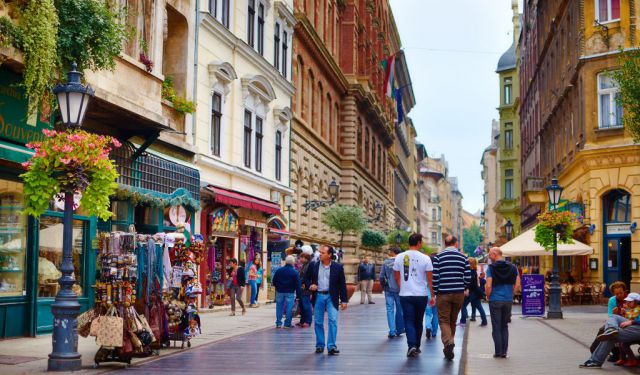 Step into the heart of Budapest for the city's best selection of shops and restaurants. Spread across a number of streets, avenues, squares and markets are shops, stores and boutiques suitable for all types of budget. You can easily spend a day or more shopping in Budapest’s center.

Andrássy Avenue is known as the Hungarian Champs-Élysées for its many upscale boutiques such as Burberry, Gucci and Louis Vuitton. An impressively stylish locale is Fashion Street (Deák Ferenc utca), known for its grand buildings, exclusive shops and luxury hotels.

One of the most popular places in downtown Budapest is Vörösmarty Square, home to luxury stores and antique shops. It also marks the start of Váci utca (Váci Street), a famous pedestrianized street in central Budapest. Along its long length are shops and restaurants that cater primarily for tourists. At the end of the street is the Central Market Hall, a spacious covered market where you can buy fresh produce, Hungarian meats, pastries, wines, clothes and souvenirs. Budapest's downtown core also features Erzsébet Square, a popular hangout for students. Come here to relax in this large green park and to sit on Budapest’s equivalent of Rome’s Spanish Steps.
Image Courtesy of Flickr and Moyan Brenn.
How it works: A discovery walk features a route using which you can explore a popular city neighborhood on your own. This walk, along with other self-guided walks in over 1,000 cities, can be found on the app "GPSmyCity: Walks in 1K+ Cities" which can be downloaded from iTunes App Store or Google Play to your mobile phone or tablet. The app's built-in GPS navigation functions allow following this walk route with ease. The app works both online and offline, so no data plan is needed when traveling abroad.