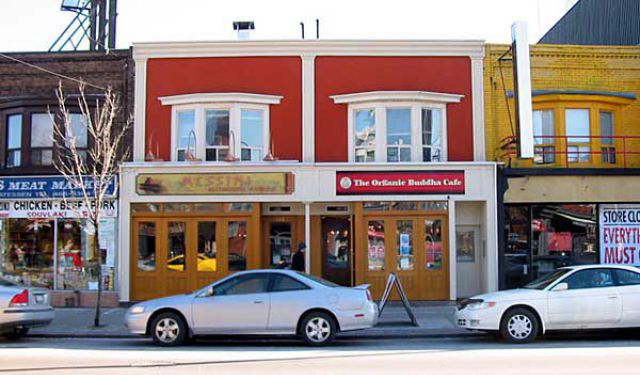 Cosmopolitan, energetic, colorful and exciting are just a handful of verbs that aptly describe the Danforth neighborhood. It is also known as Greektown for its Greek community and the numerous Greek shops and restaurants. The community was born in the first decade of the 20th century with only a handful of people, and since then has grown to become one of the world's largest Greek communities outside of Greece.

You can easily tell that you have arrived in the area when you smell the delicious aromas coming from the abundance of Greek restaurants. Other clues are several Greek flags with their familiar blue and white stripes and signs in both Greek and English. Visit restaurants, lounges, cafés and bakeries to sample Greek cuisine, including sweet and savory specialties. During the summer months, many of these establishments stay open until the small hours.

While you are here, shop for fashions and everyday clothing items in the neighborhood's stores. Greektown is also loved for hosting the largest street festival in Canada, the Krinos Taste of the Danforth. Every August, more than a million visitors come here to party hard on the streets, and to sample lots of food and take part in dozens of free activities.
Image Courtesy of Flickr and Tarkowski.
How it works: A discovery walk features a route using which you can explore a popular city neighborhood on your own. This walk, along with other self-guided walks in over 1,000 cities, can be found on the app "GPSmyCity: Walks in 1K+ Cities" which can be downloaded from iTunes App Store or Google Play to your mobile phone or tablet. The app's built-in GPS navigation functions allow following this walk route with ease. The app works both online and offline, so no data plan is needed when traveling abroad.