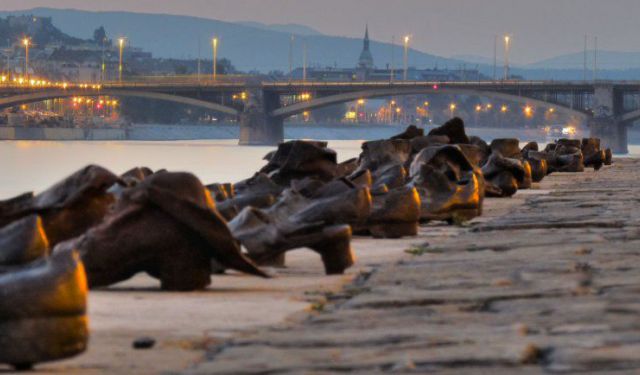 The Danube Promenade has been a popular place for a leisurely stroll since the 19th century. This attractive esplanade is situated on the Pest side of Budapest on the banks of the Danube River. Bordering the walkway are numerous restaurants, cafés, bars, casinos and five-star hotels.

As you make your way along its length, pause to enjoy the fabulous views of Buda Castle, the Citadel, Gellért Hill and a few of the city's bridges. Some people say that the vistas of Buda from here are the best in the metropolis. The promenade is also known for its numerous sculptures, including carvings of William Shakespeare, Hungarian politician Count István Széchenyi and József baron Eötvös de Vásárosnamény, a Hungarian writer and statesman.

The most poignant memorial on the walkway is the shoe sculptures which honor the Jews who were executed by the fascist Arrow Cross militiamen during World War II. The victims were ordered to take off their shoes before they were shot by the water's edge. Admire the Little Princess statue, a bronze carving which sits on the promenade's railings at Vigado Square. The work of art was created by award-winning sculptor László Marton who modeled it on his eldest daughter from his first marriage.
Image Courtesy of Flickr and joiseyshowaa.
How it works: A discovery walk features a route using which you can explore a popular city neighborhood on your own. This walk, along with other self-guided walks in over 1,000 cities, can be found on the app "GPSmyCity: Walks in 1K+ Cities" which can be downloaded from iTunes App Store or Google Play to your mobile phone or tablet. The app's built-in GPS navigation functions allow following this walk route with ease. The app works both online and offline, so no data plan is needed when traveling abroad.

3) Shoes on the Danube Bank

4) Shoes on the Danube Bank

5) Shoes on the Danube Bank