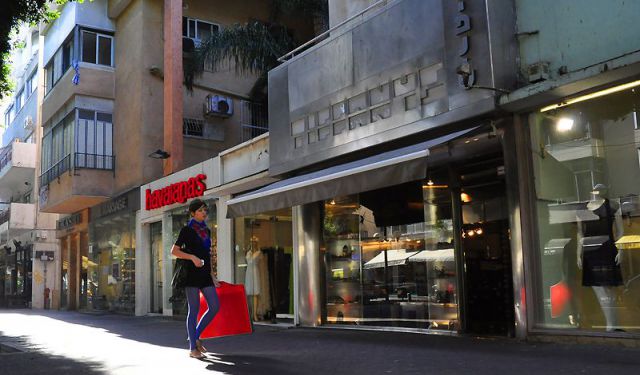 Dizengoff Street is one of the most famous and iconic streets in Tel Aviv, an epicenter of cool fashions that was once described as the "Champs-Élysées of Tel Aviv". The boulevard suffered a decline in the 1970s, but in recent years has enjoyed a major revival and is once again one of THE shopping destinations in the city.

Some of the best designer shops can be found on the pavements, so if you want a great new look, this is the place to be. The street is also the home of the Dizengoff Center, Tel Avis's first major shopping mall. It gradually opened over a period of several years in the late 1970s and early 1980s and encompasses more than 400 stores. The mall is situated on both sides of the street and bridges connect the two sections.

As well as great shopping, Dizengoff Street has a number of cafés and restaurants. One of the other major attractions of this long thoroughfare is Dizengoff Square, a vast public plaza at the confluence of six streets. It was built in the 1930s in honor of the then mayor’s wife, Tzina. In the middle is a large fountain that is illuminated at night.
Image Courtesy of Flickr and Yigal Nahor.
How it works: A discovery walk features a route using which you can explore a popular city neighborhood on your own. This walk, along with other self-guided walks in over 1,000 cities, can be found on the app "GPSmyCity: Walks in 1K+ Cities" which can be downloaded from iTunes App Store or Google Play to your mobile phone or tablet. The app's built-in GPS navigation functions allow following this walk route with ease. The app works both online and offline, so no data plan is needed when traveling abroad.