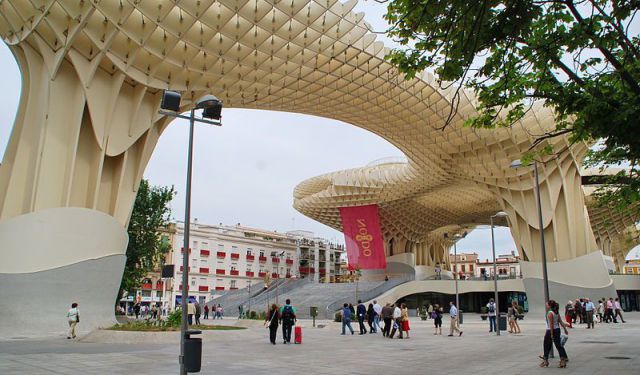 The space occupied by the Plaza de la Encarnación was once a car park, but in recent years has been transformed by the addition of the Metropol Parasol. This huge piece of architecture consists of six large timber parasols that provide shade for the square that sits beneath it. They look like giant mushrooms and divide public opinion, with some considering them to be a beautiful addition to the city’s skyline, while others are not convinced.

Visit the four-level structure which hosts a fresh produce market, shops and a restaurant with beautiful city views. Marvelous vistas can also be enjoyed from the walkway and viewing platform on the roof. At the lowest level of the Metropol Parasol is an archeological museum which includes the ruins of Roman houses and Arab buildings. They were discovered when the area was being excavated, and can be viewed from raised platforms and through glass partitions.

For more historic buildings, visit the Palacio de las Dueñas, a 15th-century Renaissance-style palace with Gothic and Moorish influences. It is also known as the Palace of the Dukes of Alba. Tours of the magnificent building are by appointment only and within its rooms is a large, decorative art collection containing more than 1,400 artifacts.
Image Courtesy of Wikimedia and Fgmvc412b.
How it works: A discovery walk features a route using which you can explore a popular city neighborhood on your own. This walk, along with other self-guided walks in over 1,000 cities, can be found on the app "GPSmyCity: Walks in 1K+ Cities" which can be downloaded from iTunes App Store or Google Play to your mobile phone or tablet. The app's built-in GPS navigation functions allow following this walk route with ease. The app works both online and offline, so no data plan is needed when traveling abroad.