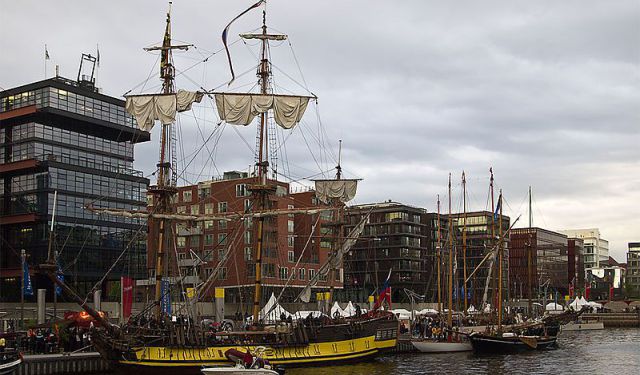 HafenCity is a new district in Hamburg, but don’t let that fact leave you thinking that there will only be modern buildings and construction sites to see! In truth, HafenCity is one of the most fascinating places to visit in the city. Part of the ancient port has been transformed into modern buildings with galleries, shops, restaurants and cafes, but it retains its old charm with the incredible Speicherstadt (warehouse district), a maze of brick-fronted warehouses standing on oak foundations, riddled with canals and small bridges. Some of the warehouses still function in their original capacity while others house museums, such as the fascinating Hamburg Dungeon.

Although it is still under construction, the ultra-modern Elbphilharmonie is something to see. Built on top of a warehouse, this elegant building is destined to be the tallest in Hamburg. Public terraces with parks and shops abound along the waterfront, such as the Marco Polo Terraces and Sandtorpark, where you can sit in the sun and watch the world go by.

Don’t miss Miniatur Wunderland, an incredible collection of model cities and mountains representing different towns around Europe and the USA. The detail of each building is amazing and in this magic world the model trains run on time!
Image Courtesy of Pedelecs.
How it works: A discovery walk features a route using which you can explore a popular city neighborhood on your own. This walk, along with other self-guided walks in over 1,000 cities, can be found on the app "GPSmyCity: Walks in 1K+ Cities" which can be downloaded from iTunes App Store or Google Play to your mobile phone or tablet. The app's built-in GPS navigation functions allow following this walk route with ease. The app works both online and offline, so no data plan is needed when traveling abroad.