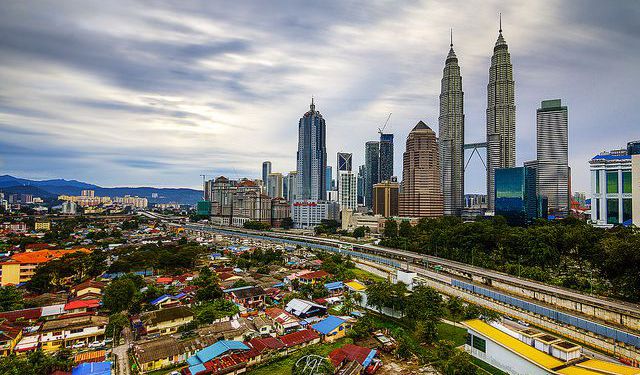 A visit to the Kampung Baru neighborhood is a wonderful opportunity to step back in time to experience early 20th-century Kuala Lumpur. Kampung Baru is actually a traditional Malaysian residential area that was established more than 100 years ago. Many of the dwellings are wooden houses built on short stilts and though they are in the heart of the city, dwarfed by gleaming skyscrapers, there is very much a rural village feel to the place.

Walk through the streets in the middle of the afternoon and already the delicious aromas of curries and fried foods are wafting through the air as street food vendors prepare their meals for the evening's trade. Later on, sample such food favorites as grilled mackerel with chili sauce, chicken satays, curries and barbecued meats. For something sweet, try fermented cassava dessert wrapped in banana leaves.

In addition to the stalls, there are many restaurants and cafés where you can savor an enchanting array of Malay dishes. Kampung Baru is one of the oldest settlements in the city, a refreshingly authentic village where traditional ways of life have survived against the relentless onward march of modernity in the streets and neighborhoods that surround it.
Image Courtesy of Flickr and naim fadil.
How it works: A discovery walk features a route using which you can explore a popular city neighborhood on your own. This walk, along with other self-guided walks in over 1,000 cities, can be found on the app "GPSmyCity: Walks in 1K+ Cities" which can be downloaded from iTunes App Store or Google Play to your mobile phone or tablet. The app's built-in GPS navigation functions allow following this walk route with ease. The app works both online and offline, so no data plan is needed when traveling abroad.