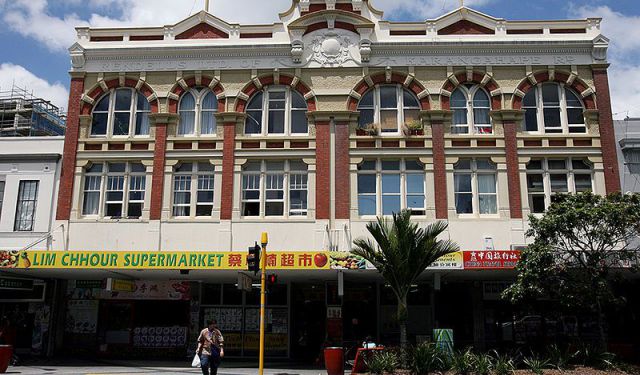 Karangahape Road is a bit of a mouthful, so the locals just call it “K Road” and it is one of the liveliest, most popular streets in the city. Once it was the principal shopping area, but with shops and residents moving into the outer areas of the city, it became rather shady and was a renowned red-light district. Since the late 1980’s and early 1990’s, however, new stores, bars and restaurants have opened and it is now a great place to visit. Most of the historical buildings date back to the late 19th century and they house a large variety of stores and boutiques.

Check out the superb Vegan market store with its animal-friendly food, clothes and beauty products. Every time you buy an article part of the sale goes to a charity of your choice, so you’ll be doing a little good while spoiling yourself! Browse through the army surplus store which sells memorabilia, clothes, gadgets and outdoor equipment.

If you want to add a little spice to your love-life, there are several adults-only stores to explore. You will find a large choice of eateries offering fare from all over the world, and some great bars featuring live bands. Wander through the lovely little park which connects K Road to Queen Street and visit the cemetery where important people in Auckland’s history have been laid to rest.
Image Courtesy of Wikimedia and craigsydnz.
How it works: A discovery walk features a route using which you can explore a popular city neighborhood on your own. This walk, along with other self-guided walks in over 1,000 cities, can be found on the app "GPSmyCity: Walks in 1K+ Cities" which can be downloaded from iTunes App Store or Google Play to your mobile phone or tablet. The app's built-in GPS navigation functions allow following this walk route with ease. The app works both online and offline, so no data plan is needed when traveling abroad.