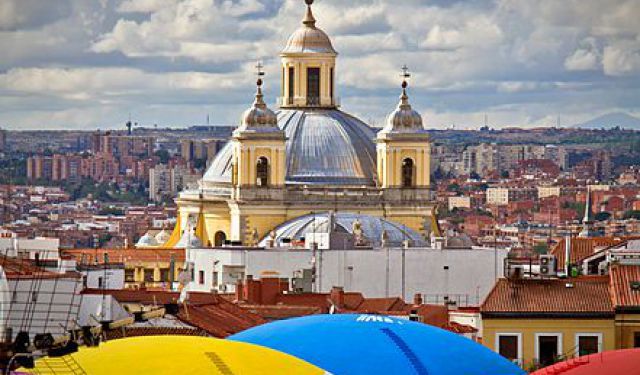 Image by Ivanpascual.es on Wikimedia under Creative Commons License.

Stunning architecture and wonderful tapas make La Latina neighborhood a must-see destination while you are in Madrid. It occupies the oldest area in the capital city and features a number of beloved historical buildings.

Stare in awe at the majesty of the San Francisco el Grande Basilica with its huge dome, the largest in Spain and the third largest in Europe. Inside, look up into the cupola to admire the paintings by José Marcelo Contreras. For more religious art and architecture, visit the Cattedrale de la Almudena. It was consecrated by Pope John Paul II, the only cathedral in Spain to be consecrated by a pope.

Spend some time in Plaza de la Plaja, which was the city's main square during the Middle Ages and a major market place in the 13th and 14th centuries. Amble down the medieval thoroughfares that surround it, including Segovia and Alfonso VI. One of the reasons to come to the square is the beautiful Capilla del Obispo. If you visit any of the bars or restaurants in La Latina, you are sure to eat well on traditional Spanish fare. The area is reputed to have one of the best concentrations of tapas bars in the city. When a particular tapa dish takes your fancy, you can always order larger portions, known as raciones.
How it works: A discovery walk features a route using which you can explore a popular city neighborhood on your own. This walk, along with other self-guided walks in over 1,000 cities, can be found on the app "GPSmyCity: Walks in 1K+ Cities" which can be downloaded from iTunes App Store or Google Play to your mobile phone or tablet. The app's built-in GPS navigation functions allow following this walk route with ease. The app works both online and offline, so no data plan is needed when traveling abroad.

4) Cathedral of the Armed Forces of Madrid

Similarly to the 5th Avenue of New York, Champs Elysee of Paris, or Bond Street of London, Madrid's Golden Mile is a home to high-end boutiques, stylish cafes, and celebrity chef restaurants. Located in the Salamanca district, this is one of the wealthiest and most expensive neighborhoods of the Spanish capital. The posh area is dotted with grand mansions and some of the most prominent...  view more

Buen Retiro Park, which translates to "Park of the Pleasant Retreat", is one of the main attractions in Madrid. Similarly to Central Park of New York City or Hyde Park of London, this former royal retreat is the most popular public outdoor space in the Spanish capital.

A green oasis in the heart of the city, the park has long been a favorite spot for both locals and tourists to go for...  view more

A city of elegant boulevards, beautiful squares, and manicured parks, the Spanish capital is renowned for its rich repositories of European art, portico-lined Plaza Mayor, baroque style Royal Palace and many other cultural and historical monuments.

Although the site of modern-day Madrid has been occupied since prehistoric times, the first historical document about an established settlement here...  view more

Amid the many writers who have expressed their love for Madrid, Ernest Hemingway is the one who did so quite famously. A recognized heavyweight of the 20th century literature - the author of The Sun Also Rises (1926), Death in the Afternoon (1932), The Fifth Column (1938), For Whom the Bell Tolls (1940) and The Old Man and the Sea (1952) - was a frequent visitor to the Spanish capital.