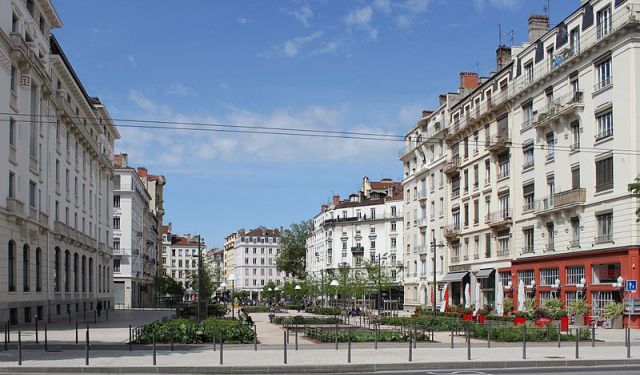 Les Brotteaux is a wonderful feast for the eyes. The wealthiest district in Lyons is celebrated for its stunning Art Deco architecture, which means there are lots of gorgeous looking buildings to admire and photograph. They include the Palace Hotel (now known as Le Legdunum), one of the largest in Europe and the Gare des Brotteaux, a beautiful old railway building. This restored Haussmannian building features an ornate sandstone façade, huge bay windows and a curved roof.

Elsewhere, find Saint-Pothin Church, which opened in 1843. This neoclassical building looks like a Greek temple with a Doric portico, triangular pediment and numerous Doric columns.
There's more delightful architecture to be seen with a walk down the Boulevard des Belges. The street is lined with plane trees and among the buildings you will glimpse are mansions from the late 19th century.

Go to the Place du Maréchal-Lyautey, an elegant public square with a monumental fountain as its centerpiece. From here, there are views of several noteworthy buildings, including the tower of City Hall and the Basilica of Our Lady of Fourvière. This church was built around the site of an ancient forum on top of Fourvière Hill, and its numerous towers and steeples make for an outstanding sight.
Image Courtesy of Wikimedia and Xavier Caré / Wikimedia Commons / CC-BY-SA.
How it works: A discovery walk features a route using which you can explore a popular city neighborhood on your own. This walk, along with other self-guided walks in over 1,000 cities, can be found on the app "GPSmyCity: Walks in 1K+ Cities" which can be downloaded from iTunes App Store or Google Play to your mobile phone or tablet. The app's built-in GPS navigation functions allow following this walk route with ease. The app works both online and offline, so no data plan is needed when traveling abroad.