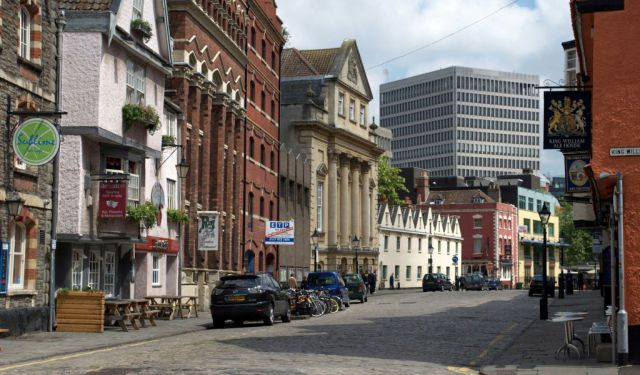 Be captivated by Bristol's historic charms when you explore the old city. This is where the metropolis had its medieval roots, and evidence of this ancient past can be seen in the hidden lanes. It can also be glimpsed in the street pattern which reflects both the lines of the old defensive city wall and the Saxon fortified settlement that predated it. The old city is to the northeast of St. Augustine's Reach and encompasses St Nicolas Market, Queen Square and King Street.

Visit historic sites, shop in the colorful markets and relax in the bars and restaurants. Stop by the Guildhall, an early 19th-century building that once served as Bristol's Crown Court. Go to The Exchange which dates back to 1741. Outside the building are four bronze tables, known as “nails” from the 16th and 17th centuries. Shop at St Nicholas Market and the Glass Arcade, home to many independent retailers.

For fresh local produce, try the Bristol Farmers' Market on Corn Street which is held every Wednesday. There are also the busy stalls of the Friday Food Market on Wine Street. Venture down Leonard Lane, known as one of Bristol's most ancient hidden lanes to go to the Centerspace Gallery. Here you will see exhibitions of the work of approximately 30 artists.
Image Courtesy of Flickr and Paul Townsend.
How it works: A discovery walk features a route using which you can explore a popular city neighborhood on your own. This walk, along with other self-guided walks in over 1,000 cities, can be found on the app "GPSmyCity: Walks in 1K+ Cities" which can be downloaded from iTunes App Store or Google Play to your mobile phone or tablet. The app's built-in GPS navigation functions allow following this walk route with ease. The app works both online and offline, so no data plan is needed when traveling abroad.

7) View from Welsh Back