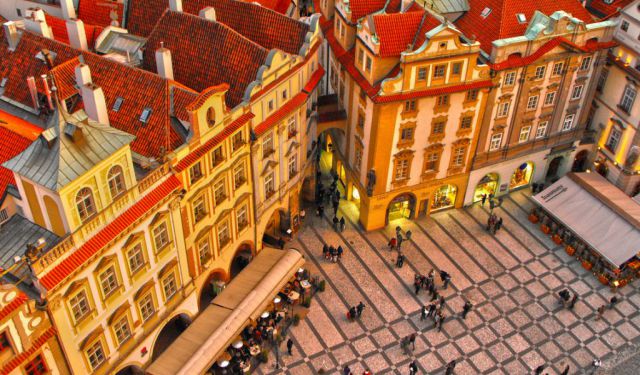 To discover the true heart of Prague you need to venture into the old town. There you will discover lots of historic buildings, hidden passageways and streets that close at dusk and open at dawn. The visitor is spoilt with some truly outstanding architecture.

Tour St. Nicholas Church, one of the city's most beautiful Baroque churches. This grand structure in the Old Town Square dates back to 1735 and replaced an earlier church that was first mentioned in the records in the 13th century. Historians know the square is even older, because a market existed here at least as early as 1091. Connecting the square with the Powder Gate is Celetná, a street with lots of contrasting architectural styles. See houses that have been remodeled in Baroque and Classical styles and buildings with Romanesque and Gothic foundations.

As you walk around the Old Town, keep an eye out for Mysi diry (mouse holes). These are little passageways that run between some of the streets, including Stupartska and Celetna streets. Don't miss out on a visit to one of the area's most unusual attractions, the Sex Machines Museum. Explore three floors of the only museum in the world devoted to sex machines and see more than 200 erotic gadgets, equipment and appliances.
How it works: A discovery walk features a route using which you can explore a popular city neighborhood on your own. This walk, along with other self-guided walks in over 1,000 cities, can be found on the app "GPSmyCity: Walks in 1K+ Cities" which can be downloaded from iTunes App Store or Google Play to your mobile phone or tablet. The app's built-in GPS navigation functions allow following this walk route with ease. The app works both online and offline, so no data plan is needed when traveling abroad.