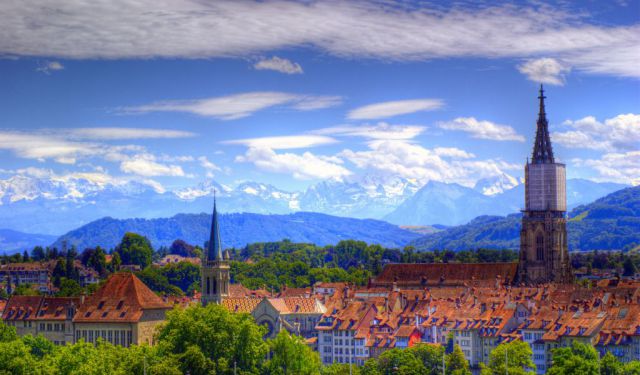 The Old City of Bern fascinates and excites with its well-preserved medieval structures that have remained unchained through the centuries. Amble through the quaint Old Town, a UNESCO World Cultural Heritage Site that is framed by the Aare River. From here, there are spectacular views of the Alps.

Within the Old Town are equally spectacular sights, such as the old limestone buildings, Renaissance fountains with colorful figurines and medieval arcades. A lot of construction work took place here after the Middle Ages, and during these years many patrician houses and public monuments were added to the cityscape. Today, you can find structures dating from several periods, including the 15th and 16th centuries. One of the many highlights is the Cathedral of Bern (Das Berner Münster). This is the largest ecclesiastical building in Switzerland, a late-Gothic edifice that dates back to the early 15th century.

Another main attraction is the six kilometers of arcades that are home to plenty of shops and restaurants. Forming the centerpiece of Bern Old Town is the Kramgasse. In previous times, this alley was once Bern's busiest trade route for marketers and shopkeepers. Today, it is a lively shopping avenue that also boasts a line of Baroque facades.
Image Courtesy of Flickr and Martin Abegglen.
How it works: A discovery walk features a route using which you can explore a popular city neighborhood on your own. This walk, along with other self-guided walks in over 1,000 cities, can be found on the app "GPSmyCity: Walks in 1K+ Cities" which can be downloaded from iTunes App Store or Google Play to your mobile phone or tablet. The app's built-in GPS navigation functions allow following this walk route with ease. The app works both online and offline, so no data plan is needed when traveling abroad.