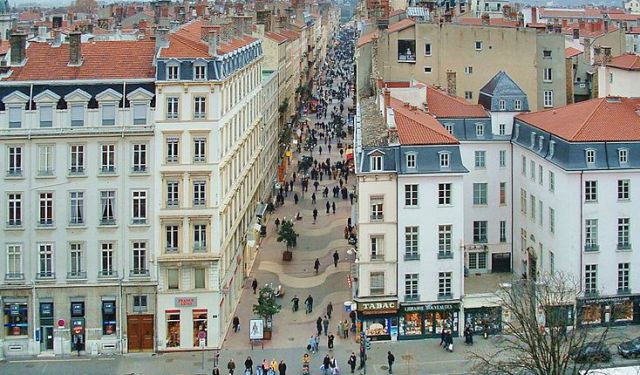 The Presqu'ile district has a lot going for it with its many shops, beautiful century-old buildings and immaculate streets. One of the most popular attractions here is the Place Bellecour, its finest square.

This huge pedestrian plaza is the fourth largest square in France and its east and west sides are lined by elegant 19th-century buildings. At the center is an equestrian statue of King Louis XIV, which was installed in the square in 1825. Look down at the base of this monument to see two allegorical statues of the Saône and the Rhône rivers. There is also a statue of the French aviator, writer and poet Antoine de Saint-Exupéry.

Leading off the magnificent square is rue Victor Hugo, one of the swankiest streets in the city and a popular shopping destination. You will find franchised shops and large affordable chains here. The road will also take you to the Place Carnot, another delightful square. Take a seat at one of the bars or restaurants lining the square and enjoy the views of five and six-story 19th-century buildings. If you are still in the mood for a spot of shopping, go to the rue Auguste Comte. Look around shops selling arts, antiques and decorations.
Image Courtesy of Wikimedia and BELZUNCE Christian.
How it works: A discovery walk features a route using which you can explore a popular city neighborhood on your own. This walk, along with other self-guided walks in over 1,000 cities, can be found on the app "GPSmyCity: Walks in 1K+ Cities" which can be downloaded from iTunes App Store or Google Play to your mobile phone or tablet. The app's built-in GPS navigation functions allow following this walk route with ease. The app works both online and offline, so no data plan is needed when traveling abroad.