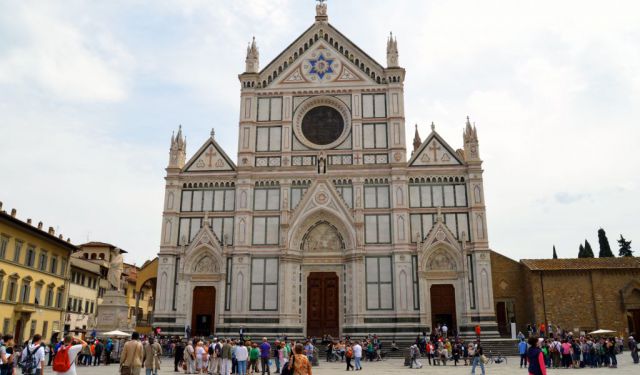 Santa Croce sits on the southeast fringe of Florence's historic center. It captivates visitors with its old world charm and appeal, and although popular, feels untouched by tourists. Since the Middle Ages the area has been a center for leatherworking, and today you can still see many leather workshops and leather shops in the neighborhood. Many of the leather stores are to be found on the huge piazza, a popular place where locals and visitors come to relax. Browse the stores then relax in a café with a fresh cup of strong coffee. The square also hosts several concerts, markets and festivals throughout the year.

Historic charms abound in the neighborhood with ancient buildings and structures. One of the most famous is the Ponte alle Grazie, a bridge that was originally built in 1227. The nine-arched crossing that you see today dates back to rebuilding work in 1345 and it is the oldest and longest bridge in the city. Visit a Gothic masterpiece, the Basilica di Santa Croce. This is the largest Franciscan church in the world and it is filled with artistic treasures. They include altarpieces, frescoes, statues, friezes and carvings on tombs. This beautiful place of worship is also the final resting place of some notable Italians, including Galileo and Michelangelo.
Image Courtesy of Flickr and David McSpadden.
How it works: A discovery walk features a route using which you can explore a popular city neighborhood on your own. This walk, along with other self-guided walks in over 1,000 cities, can be found on the app "GPSmyCity: Walks in 1K+ Cities" which can be downloaded from iTunes App Store or Google Play to your mobile phone or tablet. The app's built-in GPS navigation functions allow following this walk route with ease. The app works both online and offline, so no data plan is needed when traveling abroad.