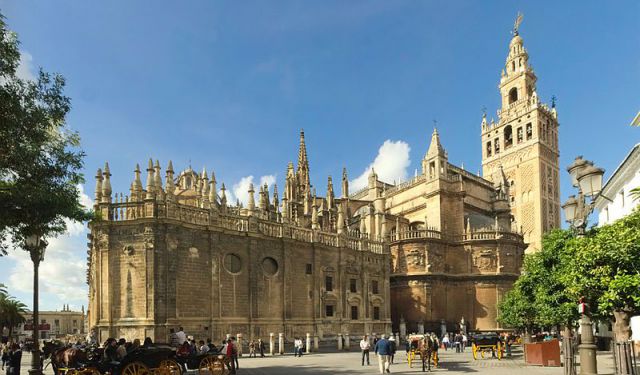 Image by Ingo Mehling on Wikimedia under Creative Commons License.

Santa Cruz is one of the most popular neighborhoods in Seville and for a very good reason. The picturesque area encompasses narrow winding cobbled streets, whitewashed houses, historic buildings and elegant squares lined with orange trees. This used to be the city's Jewish quarter and some of the locale's churches were once synagogues.

Stroll down the picturesque streets and stop at the ancient buildings. They include the Royal Citadels, the General Archive of the Indies and the City Hall. Marvel at the architecture of Seville Cathedral, a large Roman Catholic Gothic church that was built in the early 16th century. It is believed to be the third largest church in the world. Study the beautiful carved doors on its façades then step inside and browse the abundance of religious artworks in its dozens of chapels.

Then go to the stunning looking Hospital of the Venerables, a 17th-century building that was once a hospital, but now hosts concerts, exhibitions and seminars. Wander through some of Santa Cruz’s squares, such as Plazas Doña Elvira and Santa Cruz, and breathe in the delicious citrus scents coming off the orange trees. There are plenty of places to relax during your walking tour of the area. Park yourself on a beautiful tiled bench or pop into a tapas bar and watch the world go by while tucking into some tasty traditional foods.
How it works: A discovery walk features a route using which you can explore a popular city neighborhood on your own. This walk, along with other self-guided walks in over 1,000 cities, can be found on the app "GPSmyCity: Walks in 1K+ Cities" which can be downloaded from iTunes App Store or Google Play to your mobile phone or tablet. The app's built-in GPS navigation functions allow following this walk route with ease. The app works both online and offline, so no data plan is needed when traveling abroad.

3) Virgin of the Kings Square