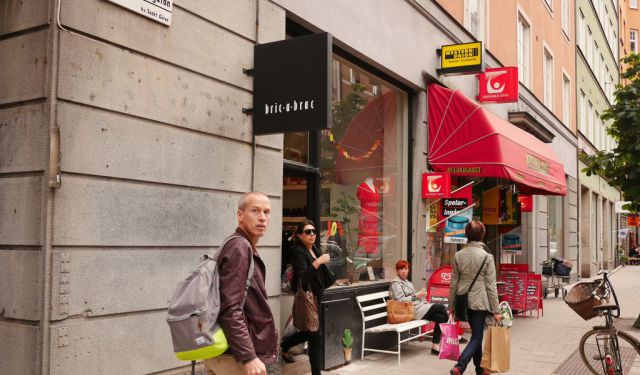 Södermalm is a district and island in central Stockholm that is connected to the mainland by several bridges. It is a trendy and relaxed place with a delightful variety of shops, including a number of specialty shops, such as the vintage clothing boutiques, children’s shops and design stores. Also known as “Söder”, this is where Stockholm's trendy set like to hang out. Vogue magazine once ranked it the coolest neighborhood in Europe.

The area is also known for its clutch of independent galleries. There are many places worth checking out while you are on the island. If you are looking for some great bargains on vintage items, try Beyond Retro and the Smiley Vintage concept store. For cool creations by up and coming and established Swedish designers, stop by Grandpa. The store sells womenswear, menswear and home decor.

Meanwhile, cutting-edge avant-garden fashions can be found in Jus. One of the nicest places to be on the island is Fjällgatan. The area sits on the edge of a cliff and affords fantastic views as well as encompassing some well-preserved buildings from the 16th century. And wherever you go in Södermalm, you will come across an abundance of great places to eat and drink.
Image Courtesy of Flickr and Franklin Heijnen.
How it works: A discovery walk features a route using which you can explore a popular city neighborhood on your own. This walk, along with other self-guided walks in over 1,000 cities, can be found on the app "GPSmyCity: Walks in 1K+ Cities" which can be downloaded from iTunes App Store or Google Play to your mobile phone or tablet. The app's built-in GPS navigation functions allow following this walk route with ease. The app works both online and offline, so no data plan is needed when traveling abroad.