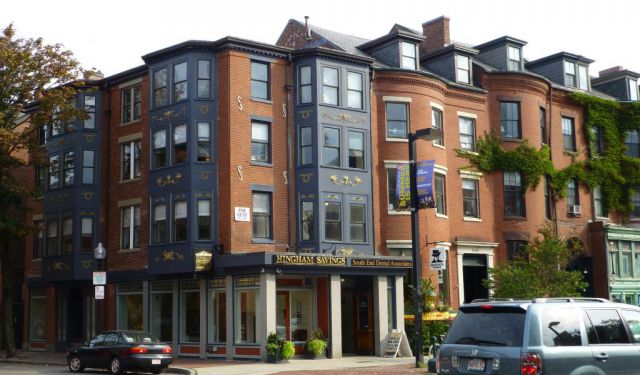 The South End neighborhood is only a few minutes from downtown and is one of the most beautiful parts of the city. In recent years it has become one of Boston’s most popular neighborhoods attracting young professionals, families and a gay and lesbian population.

One of the outstanding features that make the area so attractive are the Victorian brownstone buildings, especially along Tremont Street, Columbus Avenue and Massachusetts Avenue. In fact, in 1973 the South End was placed on the National Register of Historic Places as "the largest urban Victorian neighborhood in the country".

As you observe the architectural details of the buildings, note the many different styles. They include Renaissance Revival, Greek Revival, Gothic Revival, Italianate and French Second Empire. Also on the National Register of Historic Places is the Cyclorama, a large 19th-century brick rotunda building of the Boston Center for the Arts.

When it's time to eat, take your pick from a range of international cuisines on offer in the restaurants, including Brazilian, Indian, African, Peruvian, Thai and Latin American among others. A good place to dine is on Tremont Street which is often called "Restaurant Row".
Image Courtesy of Flickr and Joseph Wingenfeld.
How it works: A discovery walk features a route using which you can explore a popular city neighborhood on your own. This walk, along with other self-guided walks in over 1,000 cities, can be found on the app "GPSmyCity: Walks in 1K+ Cities" which can be downloaded from iTunes App Store or Google Play to your mobile phone or tablet. The app's built-in GPS navigation functions allow following this walk route with ease. The app works both online and offline, so no data plan is needed when traveling abroad.